Support for Paid Family and Medical Leave in New Hampshire

Concord Monitor coverage on April 14, 2019, of a recent Carsey brief on job protection and wage replacement, in the context of a public paid family and medical leave insurance program, noted that the brief did not include information on public opinion regarding a paid family and medical leave program for New Hampshire generally, and specifically on the question of whether a program should be mandatory or voluntary.  This data snapshot addresses that question.

In October 2018, the last period for which we conducted public opinion research, support for a paid family and medical leave program was high. Seventy-eight percent of New Hampshire residents stated support for a program that would provide a portion of wages to workers taking leave for personal or family medical reasons.1 This was statistically unchanged from earlier research conducted in 2016. Women registered higher levels of support for paid family and medical leave insurance than men, and those with a liberal or moderate political ideology reported higher support than those with a conservative ideology (Figure 1). Levels of support did not vary significantly between regions in the state.

Related to the specific question of whether a program should require participation or be voluntary: more than two-thirds, 69 percent, of New Hampshire workers supported the inclusion of a requirement that all workers participate and pay into a paid family and medical leave insurance program. Patterns in support for this all-worker approach follow those seen in overall support for a program, namely men and those with a conservative ideology registered lower support than their counterparts, and differences by region were not statistically significant (Figure 2). 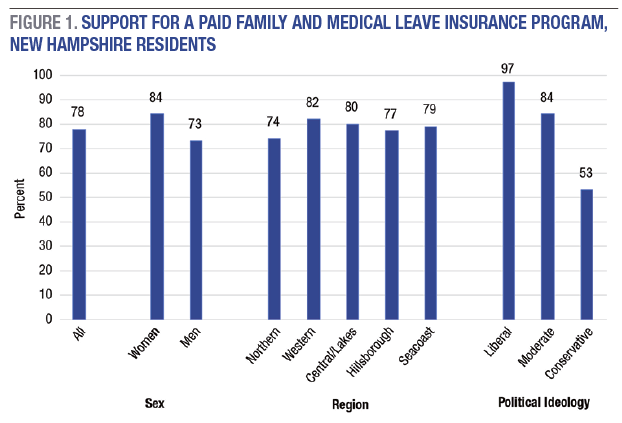 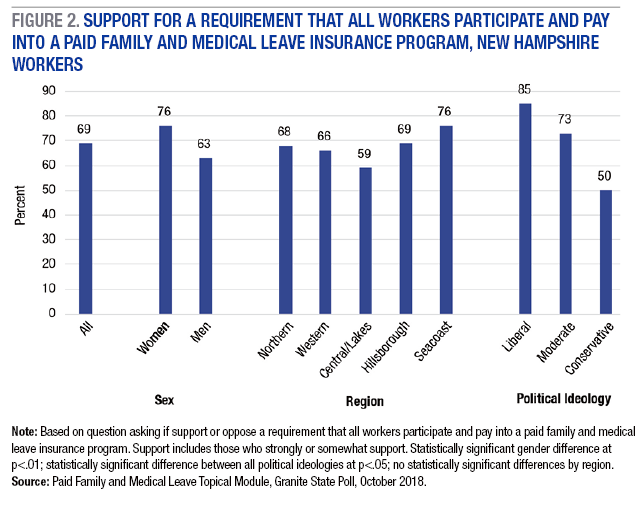 1. These include caring for a newborn or newly adopted child or a seriously ill family member, or tending to one’s own serious illness.

Kristin Smith is a family demographer at the Carsey School of Public Policy and research associate professor of sociology at the University of New Hampshire (kristin.smith@unh.edu).