Key Factors in Take Up of Paid Family and Medical Leave Among Lower-Wage Workers
April 9, 2019

Eighty-eight percent of New Hampshire workers believe that a wage replacement rate of 60 percent or more for a worker taking leave is the right amount.

About two-thirds of New Hampshire workers believe premium costs should be shared between employers and employees, while almost one-quarter believe costs should be covered mostly or solely by employers.

Legislators across the United States are discussing paid family and medical leave, which allows workers to take an extended number of weeks away from their jobs, with some wage replacement, to care for a seriously ill, injured, or disabled family member, or a new child, or to tend to one’s own serious health condition. California, New Jersey, Rhode Island, and New York currently have public programs that provide workers’ access to paid family and medical leave; Washington, Massachusetts, and the District of Columbia recently passed similar legislation and have begun implementing their programs. More than a dozen states, including New Hampshire, are debating how to create new programs, while others, like New Jersey, are broadening the reach of their programs to more workers.

At the federal level, the Family and Medical Insurance Leave (FAMILY) Act was introduced in the United States Congress in February 2019 (House Bill 1185/Senate Bill 463), with 163 House co-sponsors and 35 Senate co-sponsors at introduction. It would go beyond the Family and Medical Leave Act (FMLA) of 1993 by providing up to 12 weeks of paid leave at 66 percent of the workers’ wage up to a cap (the FMLA guaranteed only unpaid leave) and covering all workers regardless of firm size or a worker’s full- or part-time hours (FMLA eligibility is much less broad). It would be paid for by shared employee and employer payroll contributions, and provide protections against workplace retaliation. The FAMILY Act also covers self-employed workers in recognition of the changing nature of work and employment relationships.1

Nationally, 17 percent of workers have access to paid family leave through their employers. The gap between the highest- and lowest-wage workers is dramatic: among the highest decile of wage earners (people paid an average of $47.78 per hour), 30 percent have access to employer-provided paid family leave, while the share at the lowest decile (people paid an average of $10.28 per hour) is 5 percent.6 Access to employer-provided short-term disability insurance that provides partial wage replacement during a medical leave for a worker’s own serious health issue follows the same disparate pattern by wage level.7 Whether workers have access to paid family and medical leave varies with earnings. Workers who earn $600 or less per week, or about $15 per hour for 40 hours per week, have much less access to paid leave for their own illness and for parental leave than those with higher incomes (Table 1).

There is a clear delineation in access to paid leave between workers employed in firms with fewer than 50 employees and firms with more: employees working in smaller firms have lower access.

Access to paid leave without job protection may be a barrier to workers’ use of paid leave even when paid leave is available. Research shows that job protection makes a substantial difference in the security workers feel in actually taking leave. Studies have shown that workers with access to leave may choose to not take it out of fear that they will lose their jobs, be demoted, or be passed over for promotions.8 This is particularly salient for lower-earning workers because they are less likely to have job-protected leave. Though the FMLA requires eligible workers be allowed to take up to 12 weeks of leave, paid or unpaid, for family and medical reasons within a 12-month period, to be eligible employees must work for an employer with 50 or more workers and have worked 1,250 hours for the same employer over the previous year. These eligibility requirements disproportionately exclude lower-wage workers, who are more likely to work in small firms, work part-time hours, and have higher turnover between employers.9 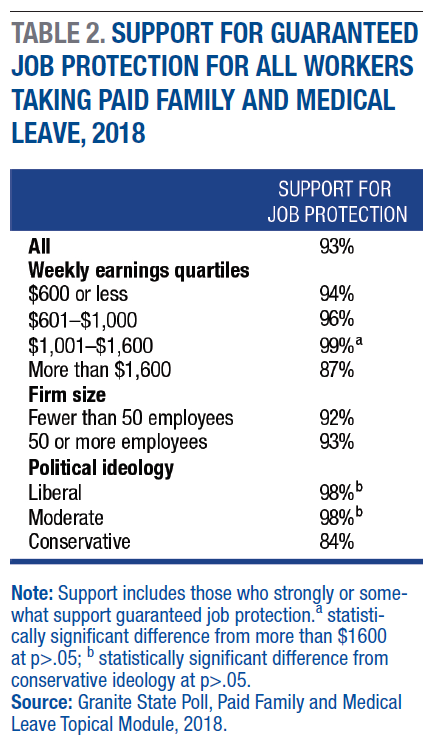 Having access to paid leave increases leave-taking among lower-wage workers. Evidence from California, where a statewide paid family leave program was implemented in 2004, shows that when the option for taking paid leave with partial wage replacement was provided, leave-taking rates doubled and average leave-taking duration increased by about five weeks among eligible new mothers.11 Economically vulnerable mothers realized the most gains.12

However, despite gains in leave-taking after a paid family leave program was introduced, disparities continue to exist in leave-taking among lower- and higher-wage workers. Analysis of existing programs shows that insufficient wage replacement may be a barrier to taking leave for lower-wage workers even when paid leave is available, because these workers may feel that they still cannot afford to take time off for an extended period.13 Within the context of a paid family and medical leave program, this obstacle to leave-taking creates a system that lower-wage workers pay into but cannot afford to fully use.

When asked about wage replacement rates while on paid leave, 60 percent of New Hampshire workers said that a 60 percent reimbursement rate was just about right, 28 percent said a higher rate was needed, and 12 percent said less was needed (Figure 1).14 A higher proportion of workers in larger firms said that more than 60 percent wage replacement was needed compared with their counterparts in firms with fewer than 50 employees, but the vast majority of workers in both groups agreed that at least 60 percent was needed (91 percent and 82 percent, respectively).

Let’s consider what a 60 percent replacement rate looks like for a lower-wage worker earning $10 per hour, or $400 per week if he or she is working 40 hours per week.15 While on leave, a 60 percent replacement rate would provide that worker just $240 per week, the equivalent of $6 an hour, or less than the federal minimum wage of $7.25. This rate is not very tenable over a twelve- or even six-week leave for a worker already struggling to make ends meet. 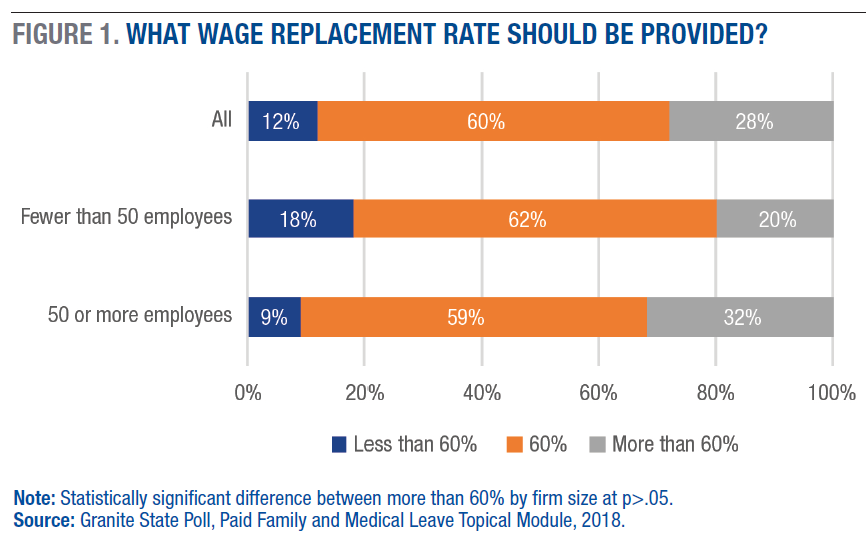 Who Pays the Premium?

Some states, recognizing that both workers and businesses benefit from employees’ access to paid leave, share program costs between employers and employees. For example, in New Jersey, New York, Washington, and Massachusetts, workers and employers share premium costs for coverage of workers’ paid leave to tend to their own health care, but for family care workers pay the entire premium cost. The FAMILY Act includes a shared employer-employee contribution for the premiums for all family and medical leave uses. Nationally, voters prefer this approach over a fully employer-paid or employee-paid program, as well as over general revenue funding or allowing workers to draw early from their Social Security retirement benefits.17 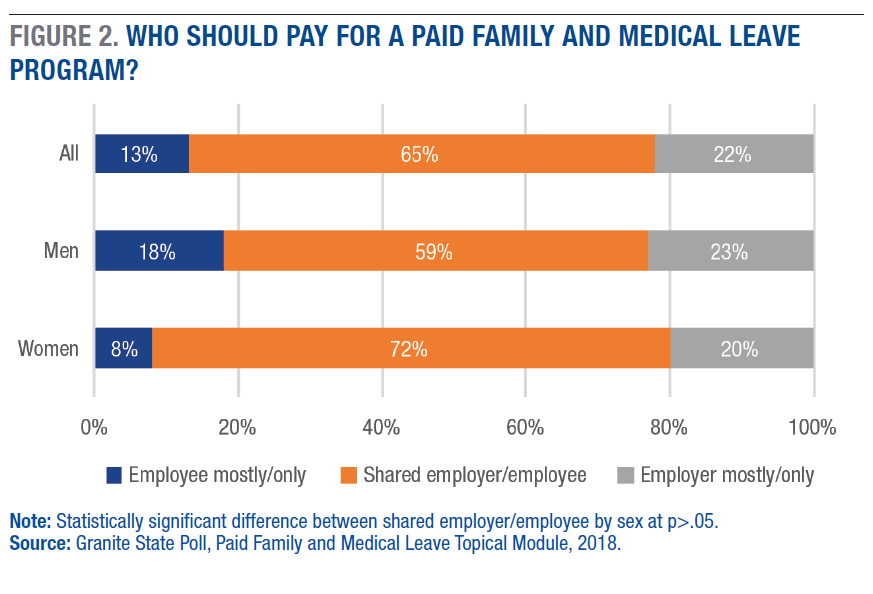 If state and federal policymakers intend to increase access to and decrease inequity in paid family and medical leave, they would do well to consider job protection and a scaled wage replacement scheme that allows lower-wage workers to maintain most of their wages. If workers are not guaranteed the right to return to their jobs (or a similar job), they will be reluctant to take the leave. If workers cannot pay their bills while on leave, they will be choosing between caring for themselves or a loved one and making ends meet. A worker’s financial stability should not be put in question when taking paid family and medical leave.

The data used in this analysis were collected in the Granite State Poll (GSP) in October 2018. The GSP, a random-digit-dialing telephone survey administered by the University of New Hampshire Survey Center, provides a statewide representative sample of approximately 500 households and collects demographic, economic, and employment information. The author developed a Paid Leave Topical Module that was added to the GSP. Employed respondents were asked to report on a battery of questions regarding access to paid and unpaid leave available to them through their employers.

The following question was asked to measure support for job protection: “Would you support or oppose a guarantee that workers be able to return to their job after using paid family and medical leave?” Respondents were asked to clarify whether they strongly supported, somewhat supported, somewhat opposed, or strongly opposed. In this brief, support includes those who strongly or somewhat supported a guarantee that workers return to their jobs.

The question regarding the right wage replacement rate asked respondents: “One proposal would provide workers with 60 percent of their typical wages through a statewide fund. Do you think 60 percent of your typical wages is too high, too low, or just about the right amount?” The following question was asked to measure who should pay the premium cost: “If a paid family and medical leave program were created in New Hampshire, how do you believe it should it be funded?” Respondents were read the following responses: (1) from employees only, (2) mostly from employees, (3) from employees and employers about equally, (4) mostly from employers, and (5) from employers only. I report on those who said they believed it should be funded from employees mostly or only, shared equally by employees and employers, and from employers mostly and only. Respondents were allowed to respond that they didn’t know or were not sure. I exclude these respondents from the analysis.

Data are not shown for respondents with missing data. All analyses are weighted using household-level weights provided by the University of New Hampshire Survey Center based on U.S. Census Bureau estimates of the New Hampshire population. Differences presented in the text are statistically significant at p<.05.

4. The Bureau of Labor Statistics (in the National Compensation Survey, 2018) estimated that nationally 17 percent of workers have paid family leave and fewer than 40 percent have paid medical leave through their employers.

9. Ariel Pihl and Gaetano Basso, “Paid Family Leave, Job Protection, and Low Take Up Among Low-Wage Workers” (University of California, Davis, no date); Fredrick Andersson, Henry Holzer, and Julia Lane, “Moving Up or Moving On: Who Gets Ahead in the Low-Wage Labor Market?” (New York, Russell Sage, 2005); Klerman et al., 2012.

10. Data not shown; however, all groups reported support for job protection at 90 percent or higher.

14. Data are not shown by earnings quartiles due to some very small sample cells in the less than 60% wage replacement category.

15. Author analysis of 2018 Current Population Survey data finds about 15 percent of wage and salary workers earned $10 or less per hour in 2017 (this calculation is derived by dividing workers’ reported annual salary in the previous year by the product of their reported usual hours worked last year multiplied by the number of weeks worked last year).

18. Differences in opinions of who should pay are not statistically significant by earnings quartile or by firm size.

The National Partnership for Women & Families provided support for the analysis and writing of this brief, the Carsey School of Public Policy provided support to produce it, and the Washington Center for Equitable Growth provided support for data collection. The author thanks Melissa Day for research assistance and Michael Ettlinger, Curt Grimm, Michele Dillon, Marybeth Mattingly, Laurel Lloyd, and Bianca Nicolosi at the Carsey School of Public Policy; Vicki Shabo at the National Partnership for Women & Families; Christina D’Allesandro at MomsRising; and Patrick Watson for substantive comments and editorial assistance.