Over half of women and nearly one-quarter of men in New Hampshire have been victims of sexual harassment at their workplaces during their lifetimes.

Sexual harassment in the workplace is a serious problem affecting workers across the United States and in New Hampshire. Nationwide, approximately four in ten women and more than one in ten men have been victims of workplace sexual harassment in their lifetimes.1 Research shows that such harassment has lasting economic, health, and family-related consequences for victims and their families: it increases victims’ job exits and financial stress, alters career paths, and has deleterious consequences for mental and physical health, including depression, anger, and self-doubt.2 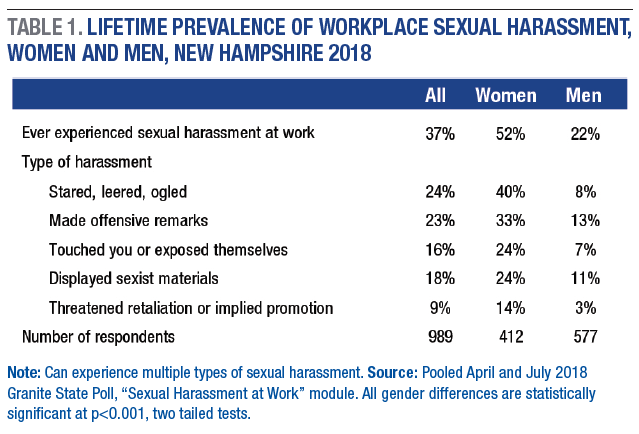 Sexual harassment negatively impacts victims’ physical and mental health, causing anxiety, depression, and diminished self-esteem, self-confidence, and psychological well-being. A higher proportion of women reported anxiety or depression than men as a result of the most recent sexual harassment victimization (27 percent and 19 percent, respectively);however, the sample sizes are small and should be interpreted with caution. Similar proportions of women and men reported feeling bad about themselves (about 10 percent each).

Sexual harassment is problematic for the workplace, as it reduces worker morale and job satisfaction, diminishes productivity, and increases absenteeism and worker withdrawal. It can be indicative of a toxic environment if employers fail to address harassers or protect victims.5 Employers would do well to invest in prevention, such as bystander intervention training, and encourage victims’ use of supports to mitigate the negative effects of workplace sexual harassment.6 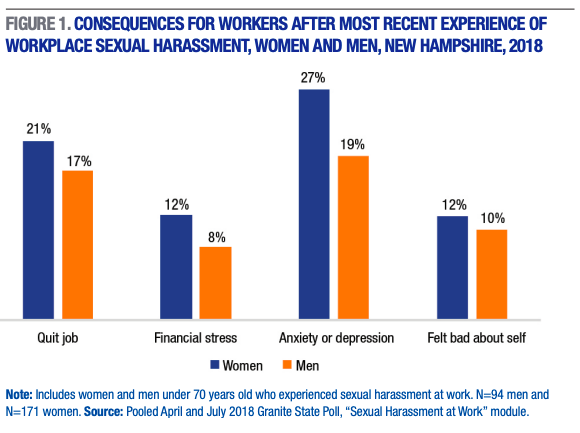 The data used in this analysis were collected in the Granite State Poll (GSP) in April and July 2018. The GSP, a random-digit-dialing telephone survey administered by the University of New Hampshire Survey Center, provides a statewide representative sample of approximately 500 households and collects demographic, economic, and employment information. The authors developed a Sexual Harassment at Work Topical Module that was added to the GSP based on established definitions of sexual harassment at work in previous studies, including the National Study on Sexual Harassment and Assault Study, the Youth Development Study, and the SEQ: DoD Study. For a full definition of workplace sexual harassment, with examples, see the United Nations report. All analyses are weighted using household-level weights provided by the UNH Survey Center based on U.S. Census Bureau estimates of the New Hampshire population.

This research was funded by the Carsey School of Public Policy and the Prevention Innovations Research Center. The authors would like to thank Michael Ettlinger, Curt Grimm, Michele Dillon, Marybeth Mattingly, Laurel Lloyd, and Bianca Nicolosi at the Carsey School of Public Policy; Jennifer Scrafford, Caroline Leyva, Laurie Dawe, and Taylor Flagg at the Prevention Innovations Research Center; and Patrick Watson for his editorial assistance.