Federal programs are critical for helping those with low incomes make ends meet. But not all such programs are equally effective at reducing poverty, nor do they benefit all of those in poverty uniformly. In this brief, we explore the extent to which rural and urban residents access five social programs—Social Security, disability benefits, federal and state cash assistance, the Earned Income Tax Credit (EITC), and the Supplemental Nutrition Assistance Program (SNAP)— and the effect of these programs individually and collectively in bringing family incomes closer to the poverty threshold.

Research has long shown the benefit of Social Security to elderly populations and the role of SNAP and the EITC in reducing poverty among families with young children. This brief expands this line of inquiry by analyzing the effects of these programs for rural and urban residents.

The Mixed Reach of Social Programs Into Poor Populations

After accounting for all resources and necessary expenditures (see Box 1), 12.9 percent of rural and 14.3 percent of urban residents are poor. Although their incomes remain below the SPM poverty threshold, more than seven in ten people living in poverty report income from at least one of the five types of programs examined here (Figure 1). The reach of each program varies by place type; for instance, poor rural residents are more likely to receive SNAP than their urban counterparts, who are more likely to receive the EITC. 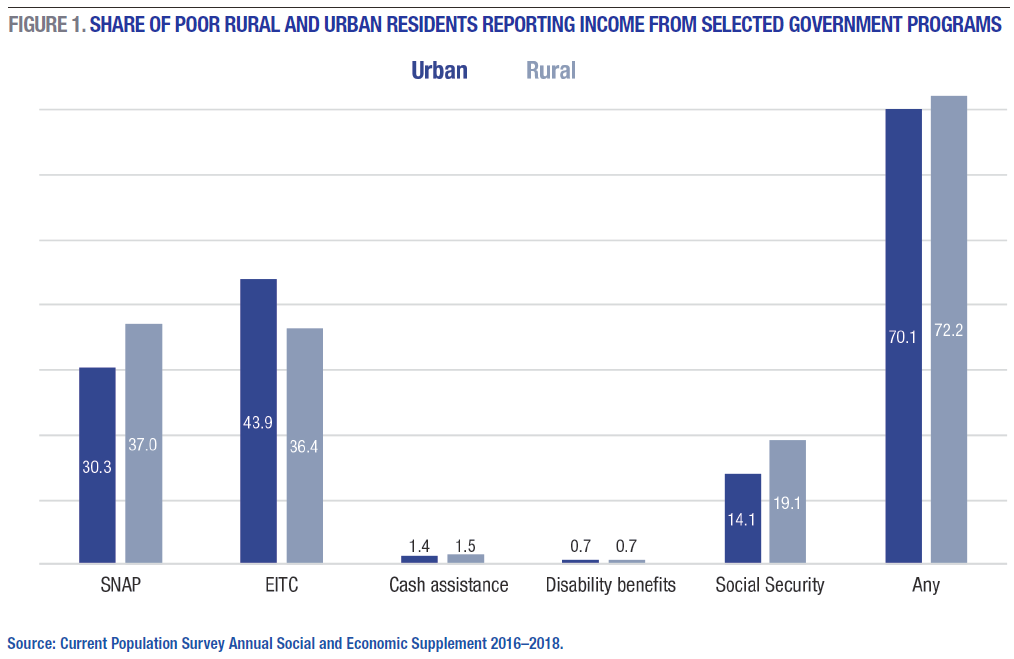 These five government programs combined keep 11.5 percent of rural and 7.6 percent of urban residents out of poverty; Figure 2 shows how much the poverty rate would increase absent each of these key programs (all else equal). For instance, poverty in rural places would rise by 7.6 percentage points (to 20.5 percent) absent Social Security, a much more concentrated effect than in urban places. In contrast, the EITC decreases the poverty rate by about the same amount (2 percentage points) in rural and urban places.

Importantly, cash assistance has nearly no effect on reducing poverty rates, probably because only very small shares of those in poverty receive these benefits (Figure 1) and because the cash allotments are often small. Among the relatively few receiving cash assistance 11 percent are lifted above the poverty line by that income. 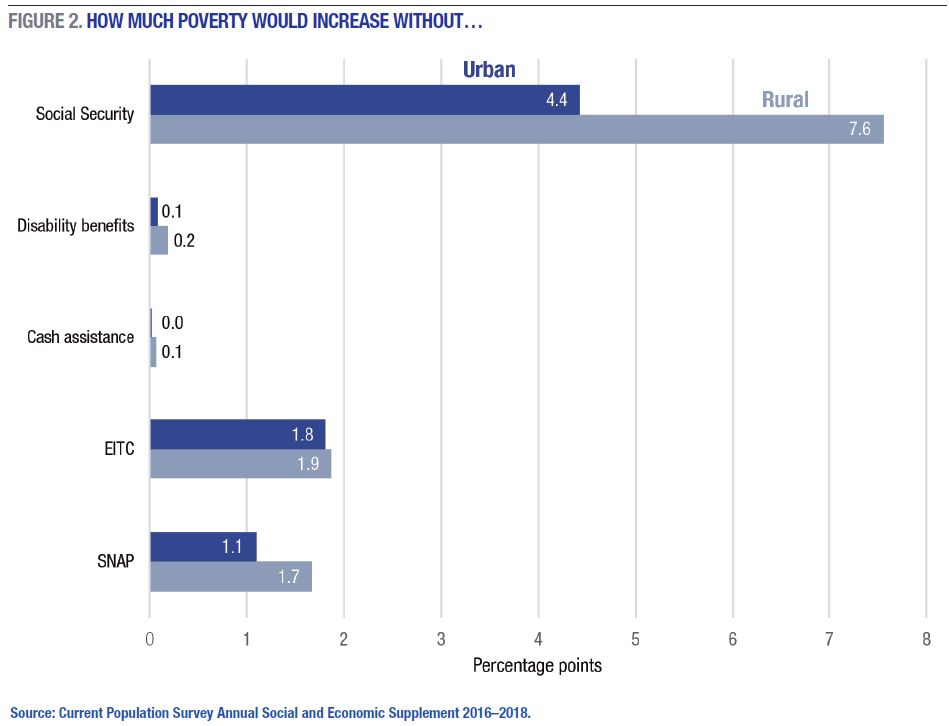 A higher share of rural residents report income from these five programs than do urban residents. Social Security is an especially important poverty-alleviating mechanism there, likely due to the higher shares of older people in rural places. Another possibility is that Social Security benefits, which are allocated with a national formula, go further in rural areas because the cost of living, as measured by the SPM, is lower.

As policymakers consider revisions to federal social programs, like adding work requirements to SNAP and changing eligibility parameters for tax credits, the implications of these changes for the poverty rate are sometimes overlooked. These findings make clear that policymakers should consider how changes to eligibility or benefit levels, and investments in, different programs will yield varying results within and across places.

Poverty—Throughout this brief, we rely on the supplemental poverty measure (SPM), which considers a family’s resources including post-tax income and transfers, government assistance, and deductions for medical care and work expenses, such as transportation and child care. SPM thresholds account for consumer spending patterns on food, clothing, shelter, and utilities, and are adjusted geographically to account for differences in the cost of housing.

This analysis was made possible by funding from the Annie E. Casey Foundation. The authors would like to thank Michael Ettlinger, Curt Grimm, Michele Dillon, Laurel Lloyd, and Bianca Nicolosi at the Carsey School of Public Policy, and Patrick Watson for his editorial assistance.