The Interaction Between the Minimum Wage and the Federal EITC

For workers earning the minimum wage, an increase would result in higher income; none would experience a lower net income due to changes in the federal EITC credit (though this may be offset by loss of other safety net program benefits).

For some family types, increased income would come primarily from a higher minimum wage; for others, gains would also come from the higher-value federal EITC triggered by their higher earnings.

Effects of an Increased Minimum Wage Vary by Family Characteristics

Table 1 shows annual earnings and federal EITC benefits for different kinds of families under several possible minimum wage scenarios. It assumes that earners work these hours 50 weeks per year and that in married couple families both adults work.

In no scenario does an increase in the minimum wage result in lower net income for families, though the effects vary substantially by family type and level of work. Increasing the minimum wage to $9 per hour would generally have the most consistent impact on workers without children, although unmarried, part-time workers with children would also see increases of more than 20 percent. Among full-time married workers with children, the higher wage would result in significantly reduced EITC benefits, but net income would still rise between 16.2 and 18.7 percent.

Gains are considerably larger under the second scenario—increasing the minimum wage to $12. For unmarried part-time workers with children, these gains are particularly important, as increased earnings also make them eligible for more-valuable EITC credits (although this is true in some cases under the first scenario too). For married workers with children, however, the dual earnings of even part-time workers are close to the value at which EITC begins to decline for additional wages to result in much higher credits. Instead, earnings gains among married couples with children would be largely derived from the higher earnings of the $12 minimum wage. 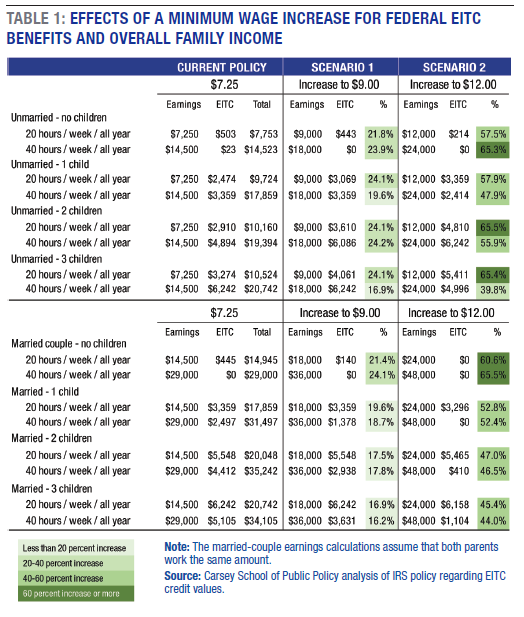 For some families, the largest gains from an increase in the minimum wage would come directly from the higher wage itself, while for others gains would come disproportionately from the higher-value EITC derived from their newly risen earnings.2 It makes sense that in all scenarios considered here, a higher minimum wage is not associated with lower net income, since the EITC was designed to promote and support work.

However, some caution is needed, since low-income families often participate in social safety net programs besides the EITC that are typically based on pre-tax income. For these families, the loss of benefits like public health insurance and nutrition assistance may substantially offset minimum wage increases.3

Data on EITC values for different filing types, number of children, and household earnings are provided by the Internal Revenue Service for 2016. All analyses of minimum wage increase values are the authors’ own.

1. It is beyond the scope of our current work to look at other safety net programs and how benefit levels may change as earnings rise. However, for most safety net programs, eligibility is determined on pre-tax income, so changes in the EITC would not likely have a large impact the way that changes to the minimum wage might.

2. Not all filers who are eligible for the EITC claim the credit; research from Brookings suggests that fewer than eight in ten do. For filers who do not claim any EITC credit, of course, a minimum wage increase would be especially important. See Natalie Holmes and Alan Berube, “The Earned Income Tax Credit and Community Economic Stability” (Washington, DC: Brookings Institution, 2015), https://www.brookings.edu/articles/the-earned-income-tax-credit-and-comm....

This analysis was made possible by funding from the Annie E. Casey Foundation and anonymous donors. The authors would like to thank Michael Ettlinger, Curt Grimm, Michele Dillon, Laurel Lloyd, and Bianca Nicolosi at the Carsey School of Public Policy, and Patrick Watson for his editorial assistance.