Full-Time Employment Not Always a Ticket to Health Insurance

In 2016, only 33 percent of low-income workers (those below 200 percent of the official poverty threshold) employed full time, year round reported having employer-based health insurance, compared to 57 percent of higher-income workers.

For those whose employers offer plans, low-income workers are less likely to enroll, citing ineligibility and cost as barriers. When higher-income workers don’t enroll, it is most often because they do not need the plan.

More than 25 percent of low-income workers employed full time, year round reported having no health insurance of any kind at any time in the previous year, compared with just 8 percent of higher-income workers.

As policy makers consider changes to the Patient Protection and Affordable Care Act (ACA) and Medicaid, it is important to consider that employment does not necessarily lead to health coverage for lower-income workers in the same way it typically does for higher-income workers. This brief documents differences in health insurance coverage by workers’ income, and explores who is eligible for an employer-based plan, who enrolls in those plans, and the reasons why workers choose not to enroll.

Workers aged 25–64 employed full time, year round (that is, working at least 35 hours per week for 52 weeks in the previous year)2 participate in a range of health insurance arrangements (Figure 1). Just one-third of low-income workers, defined here as those with incomes below 200 percent of the official poverty threshold (see Box 1), hold their own employer-based insurance, compared with more than half of higher-income workers. In addition, there is a stark income difference in the share of workers who are covered as a dependent on someone else’s employer-based insurance, such as a spouse’s: 2.5 percent of low-income workers report this kind of insurance, versus 12.0 percent of higher-income workers.

More than one-quarter of low-income workers employed full time, year round are uninsured, and an additional 17 percent are enrolled in public insurance. In terms of place of residence, low-income rural and urban workers are equally likely to be uninsured, but rural workers are slightly more likely to have their own employer-based health insurance (39.6 versus 35.1 percent).3

There are two possible explanations for why low-income workers are less likely to have their own employer-based health insurance: either they do not have access to plans through work, or they enroll in available plans at lower rates. (Due to data limitations, the remainder of this brief uses data that refer to employment and insurance coverage at time of interview, rather than in the previous year, as in Figure 1).4 As shown in Figure 2, both scenarios are true: the share of those working for an employer that does not offer health insurance to any employee is twice as high among low-income workers as among higher-income workers (39.8 percent versus 18.4 percent). Additional data show that this disparity appears partially driven by the types of jobs that low-income workers occupy. For example, one in five low-income workers is in the hospitality and service industry, a sector in which workers are the least likely to report coverage from their own employer-based plans.5 Further, low-income workers report not enrolling in offered coverage at higher rates than their higher-income counterparts (22.5 percent versus 16.6 percent). 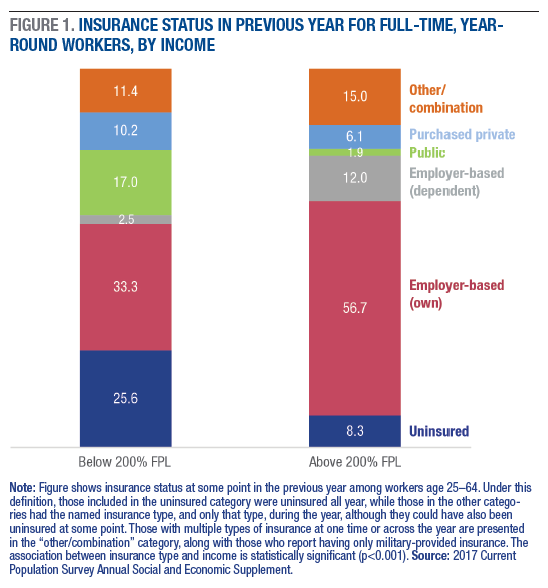 Figure 2 also illustrates the reasons why workers do not enroll when their employer offers an insurance plan, and the reasons differ sharply by workers’ income. Most higher-income workers who forgo employer coverage say they do so because they don’t need it (61.1 percent), while the most common response for low-income workers is that the offered plan is too expensive (38.2 percent). Low-income workers are also disproportionately likely to report being ineligible for the offered plan; the reason most often cited by workers in this category is that they have not worked for their employer long enough to be eligible (data not shown).

Figure 3 demonstrates the variation in need for employer-based plans among workers who do not enroll. For instance, the vast majority of workers who report that they do not need coverage from their employers are indeed covered by some other plan (97.8 percent). However, significant gaps in coverage remain for two groups: those who are ineligible for their employers’ plans because they haven’t been employed long enough to qualify (“new employees”), and those who are eligible for coverage but do not enroll because of cost. In each of these groups, only about 40 percent of workers have health insurance.

Despite gains in insurance coverage since passage of the ACA,7 some groups continue to be left out. That one-quarter of low-income, full-time, year-round workers did not have any kind of health insurance in the previous year suggests that there are still gaps in expanding coverage among workers. Strategies for reaching them might include enrolling the lowest-income workers in Medicaid,8 connecting workers who are not offered employer-based plans with affordable alternatives (for example, marketplace plans), or making employer-based plans more affordable through subsidies. For low-income workers in particular, many likely already qualify for subsidized coverage through the health insurance marketplace, available to those below 400 percent of the poverty threshold,9 and ensuring that potential enrollees know about this option is key. However, between 2017 and 2018 the number of individuals who enrolled in a marketplace plan declined by 3.7 percent,10 perhaps due to a shortened enrollment window and cuts to the advertising budget for the 2018 plan year.11 Whatever the reason, it is unlikely that the share of low-income workers citing cost as a barrier will decrease in 2018. 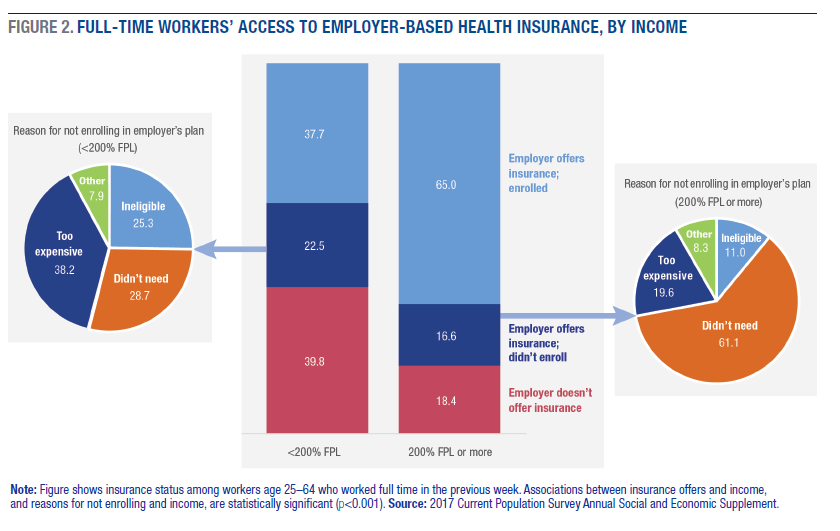 Workers who are offered employer-based plans don’t usually qualify for marketplace subsidies.12 As mentioned above, 23 percent of workers who didn’t enroll in offered health insurance said it was due to cost (38.2 percent of low-income and 19.6 percent of higher-income workers), and more than half of these workers were uninsured as a result. This outcome suggests that existing coverage systems may be succeeding in providing workers access but falling short on affordability.

Effects on the employer-based market of the repeal of the individual mandate, which required (most) people to carry health insurance,13 are unclear thus far. But for workers who are not offered or are ineligible for employer-based plans and need to purchase insurance without support from public programs or subsidies, there is a risk that recent changes to the ACA will result in increased costs. Without the mandate, premiums may increase in the individual market as healthy people opt to go without coverage and leave higher-risk populations behind, and consumers may have fewer choices of insurers as some choose to exit smaller markets.14 Despite the executive order ending governmental subsidies to health insurance companies in late 2017,15 insurers are still required to provide subsidies to low-income enrollees, though now without government reimbursement. It is likely that insurers will seek to recover their costs somehow, such as by increasing premiums on enrollees above 400 percent of the poverty threshold who pay for their premiums out of pocket and without government support.16 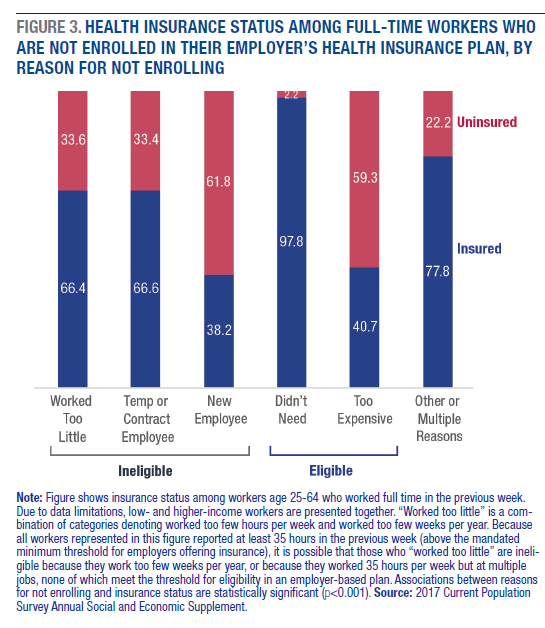 The data for this project are from the 2017 Current Population Survey (CPS) Annual Social and Economic Supplement (ASEC), downloaded from IPUMS.17 All questions about income and health insurance refer to 2016 unless otherwise noted. Readers should be cautious when comparing estimates between groups because the CPS is asked of a sample of the population, rather than the total population. Although some estimates may appear different from one another, it is possible that any difference is due to sampling error. Further, in some cases very small differences may be statistically significant due to the large sample size of the CPS. Nonetheless, all differences discussed in this brief are statistically significant (p<0.05).

Box 1: Definitions of Low Income and Higher Income
In this brief, low income refers to workers with family incomes below 200 percent of the 2016 official federal poverty threshold. Higher income refers to those with family incomes above this cutoff. In dollar terms, 200 percent of the poverty threshold equates to $24,972 for a single person and $48,678 for a family of two adults and two children.6

2. In the Current Population Survey, workers are instructed to include any weeks when they used paid vacation or sick leave as weeks worked.

3. Analyses also show considerable place-based differences in the share of low-income workers who are uninsured based on whether they live in a state that has expanded Medicaid. Among low-income, full-time, year-round workers, 21.8 percent of those in a Medicaid expansion state were uninsured in 2016, versus 30.6 percent in non-expansion states. Listings of Medicaid expansion states were obtained from the Kaiser Family Foundation and merged in with CPS ASEC data for this supplemental analysis. This analysis does not consider Maine to be an “expansion state” given that expansion there was not in effect in 2016. For more, see https://www.kff.org/health-reform/state-indicator/state-activity-around-....

4. Specifically, detailed data on employer-based health insurance are collected only about current coverage. However, the analysis for Figure 2 is restricted to those who worked at least 35 hours in the previous week (“full time”) to maximize the comparability with the earlier figure. Note that a larger share of the sample reports working full time in the previous week than full time, year round in the previous year, although there is a high degree of overlap in the two subpopulations: 86 percent of those who worked full time last week also worked full time, year round in 2016.

8. Tangentially relevant to this brief are the ongoing efforts of several states to implement work requirements as a condition of Medicaid receipt. On January 11, 2018, the Centers for Medicare and Medicaid Services (CMS) issued a memo detailing a new commitment to consider states’ applications for Section 1115 waivers, a mechanism that allows states some flexibility in the design and delivery of Medicaid. The CMS memo notes that attaching a work requirement to Medicaid should be done with the goal of promoting health among Medicaid beneficiaries. To date, at least ten states have applied for a Section 1115 work requirement waiver; waivers have been approved in Kentucky, Indiana, and Arkansas so far. For the CMS memo, see https://www.medicaid.gov/federal-policy-guidance/downloads/smd18002.pdf. For a list of states that have applied for waivers and state-specific waiver details, see https://www.kff.org/medicaid/issue-brief/medicaid-and-work-requirements-new-guidance-state-waiver-details-and-key-issues/.

12. See “If You Have Job-Based Insurance,”https://www.healthcare.gov/have-job-based-coverage/options/.

13. While the mandate requires most people to have a minimum level of health insurance or pay a fee, there is a hardship exception. For more detail on groups who are exempt, see https://www.healthcare.gov/health-coverage-exemptions/exemptions-from-the-fee/. For more on the repeal of the mandate, see http://fortune.com/2017/12/20/tax-bill-individual-mandate-obamacare/.

15. These reimbursements, known as cost-sharing reduction (CSR) payments, were deemed unlawful by the Trump administration, which issued a statement that CSR payments would be discontinued immediately. See “Trump Administration Takes Action to Abide by the Law and Constitution, Discontinue CSR Payments,” Press Release, U.S. Department of Health and Human Services, October 12, 2017, https://www.hhs.gov/about/news/2017/10/12/trump-administration-takes-action-abide-law-constitution-discontinue-csr-payments.html.

This work was supported by a grant from the Annie E. Casey Foundation and with funds provided by anonymous donors. The author thanks Michael Ettlinger, Curt Grimm, Michele Dillon, Beth Mattingly, and Amy Sterndale at the Carsey School of Public Policy for feedback on earlier drafts; Laurel Lloyd and Bianca Nicolosi at the Carsey School for their assistance with layout; and Patrick Watson for editorial assistance.