About 70 percent of Granite Staters support the state DMV sharing photos with the FBI for inclusion in the national facial recognition database.

Trump voters show the strongest support, but over 60 percent of Clinton voters and nonvoters would also support the practice.

Women more strongly support the sharing of DMV photos than do men.

Support in the Manchester and Seacoast areas is less than in other areas of the state but still exceeds 60 percent.

We wanted to know how New Hampshire residents would feel about having their driver’s license photos shared with the FBI and whether certain reasons to share photos would be more convincing than others.

In our polling, we used language from the typical agreement that the 21 states have with the FBI to describe three reasons to share driver’s license photos:

We also looked at how political affiliation, gender, and region of residence within the state affected the results.

The findings presented here are based on a Granite State Poll, conducted by the University of New Hampshire Survey Center, between January 31 and February 8, 2017. Five hundred and five randomly selected New Hampshire adults were interviewed by live interviewers in English on landline and cellular telephone.

We used a split-ballot survey experiment in which respondents were randomized into three groups. We posed separate questions to each of the three groups to determine whether sharing of photos is more acceptable to the public based on the articulated reasons in the agreements. Respondents were asked to indicate whether they agreed or disagreed with the following statements: 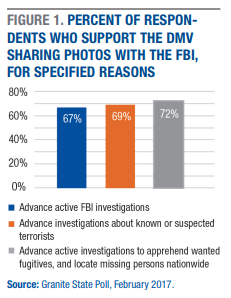 Figure 1 shows that for each of the mentioned reasons, about 70 percent of Granite Staters are in favor of sharing data, regardless of the reason. There were no significant differences in support, even if terrorism or specific cases like fugitives and missing persons were mentioned.3 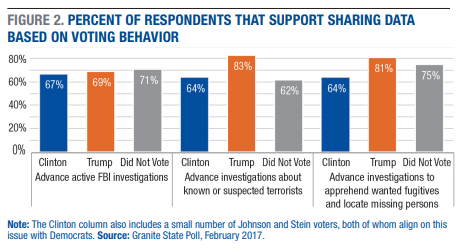 Large majorities of both Trump and Clinton voters as well as nonvoters support sharing data, although Trump voters are generally more supportive (Figure 2), particularly when it comes to sharing data to capture potential terrorists. Trump voters overwhelming supported this rationale at 83 percent, compared to 62 percent of nonvoters and 64 percent of Clinton voters. We saw similar differences between Trump and Clinton voters when asked if they would support sharing data for purposes of apprehending wanted fugitives and locating missing persons.

Gender is a strong predictor of support for the use of facial recognition data. Women are more supportive than men, with rates exceeding men’s by 17 percentage points on average (Figure 3). Women are especially convinced by the terrorism argument, with 86 percent expressing support for data sharing in cases of investigating known or suspected terrorists. Only 58 percent of men felt similarly.

We wanted to examine how two of the major population centers—the Manchester area and the Seacoast4—compared to the remainder of the state (Figure 4). On average, Manchester and the Seacoast are less supportive of picture sharing for facial recognition by an average of 8 percentage points across the different rationales. Politically, both areas lean slightly left of center, which might explain the results, and the results might also indicate concerns that have been resonating in larger city centers across the United States about the use of the technology.

Stepping Into the Unknown Territory of Facial Recognition Technology

The implications of the use of facial recognition technology are vast, and but they have yet to receive the attention needed by policymakers.

In a July 2018 blog post titled “Facial Recognition Technology: The Need for Public Regulation and Corporate Responsibility,” Brad Smith, president of Microsoft Corporation, noted the positive aspects of facial recognition, such as allowing the capture of a terrorist before he or she acts, but also shared his concerns. He wrote:

[I]magine a government tracking everywhere you walked over the past month without your permission or knowledge. Imagine a database of everyone who attended a political rally that constitutes the very essence of free speech. Imagine the stores of a shopping mall using facial recognition to share information with each other about each shelf that you browse and product you buy, without asking you first. This has long been the stuff of science fiction and popular movies—like “Minority Report,” “Enemy of the State,” and even “1984”—but now it’s on the verge of becoming possible.

The New York Times recently reported that the Chinese government is using a massive facial recognition platform to “track and control the Uighurs,” a Muslim minority.5
New Hampshire is one of the few states comprehensively addressing the collection of biometric data. In most instances, the state is prohibited from collecting and storing this information, and it has banned the use of facial recognition technology through the use of body-worn cameras. The state prohibits the sharing of driver’s license data, including facial images, with the federal government “for the purpose of creating or enhancing a federal identification database.”6 However, the legislature is currently considering how commercial entities may use facial recognition technology.

A discussion among law enforcement, policymakers, and the public seems imperative as the use of facial recognition technology continues to expand.

Dan Bromberg is an Associate Professor of Public Administration and Political Science in the Carsey School of Public Policy and the Department of Political Science at the University of New Hampshire. He is the Director of Academic Programs for the Carsey School of Public Policy. Dan’s research focuses on public management and organizational accountability. Recent publications include Gatekeepers: How Procurement Personnel Guard against Hybrid Accountability, Pay-to-Play: An Examination of State Laws, and Body Worn Cameras and Policing: A List Experiment of Citizen Overt and True Support.

Étienne Charbonneau is the Canada Research Chair in Comparative Public Management at École nationale d’administration publique, Montreal, Canada. His research focuses on citizen satisfaction and accountability. Some of his current research projects have to do with public support for surveillance. Recent publications include Citizens Respond to Outputs, Outcomes, and Costs: A Survey Experiment about an HIV/AIDS and Process Tracing in Public Administration: The Implications of Practitioner Insights for Methods of Inquiry.

Andrew Smith has been Director of the University of New Hampshire Survey Center since 1999 and is Professor of Practice in the UNH Department of Political Science. He has published in multiple journals, including APSR and POQ, and is co-author with David Moore of The First Primary: New Hampshire’s Outsize Role in Presidential Nominations. His recent research focus is on methodological issues in survey research.