What to Do With Dams

An Assessment of Public Opinion to Inform the Debate in New Hampshire
July 25, 2019

A majority of respondents in three Granite State Polls prefer to remove dams when the alternative is to keep them for maintenance of waterfront property values, preservation of industrial history, or maintenance of lake- and pond-based recreation.

A majority of survey respondents prefer to keep dams when dams are for hydropower generation.

Respondents’ age, gender, and party affiliation often predict their preference for dam removal. Levels of formal education do not make much difference.

Younger respondents, women, and Democrats are more likely to support dam removal, although this varies somewhat depending on the tradeoffs.

New England’s rivers and streams host more than 14,000 dams,1 most of them decades or even centuries old and many built for purposes that no longer apply, such as powering long-closed mills. Aging dams require upgrades and maintenance to avoid becoming public safety risks, and many shape ecosystems and shorelines in ways that favor some human uses over others.

Old dams present a policy dilemma. If nothing is done, they will continue to deteriorate, potentially with bad results. Yet maintenance and upgrades are expensive. Might public funds be directed instead toward removal of obsolete dams, opening up free-flowing rivers? Selective and strategic dam removal would require public support and, even more fundamentally, awareness about this issue.

In this brief, we present results from statewide surveys in New Hampshire that explore public views about dam removal.

Why Care About New Hampshire’s Dams?

While new dams continue to be constructed across the globe, the dominant trend across the United States and New England over the past several decades is the removal of older, unneeded dams. Almost 160 New England dams were taken out between 1990 and 2017,2 including 34 of the approximately 4,800 dams in New Hampshire.3Many of New Hampshire’s dams are reaching the end of their lifespan and require expensive maintenance or removal in order to meet safety standards. In fact, the state’s dams are in such poor condition that the American Society of Civil Engineers (ASCE) assigned them a letter grade of C–, meaning  “mediocre” and requiring attention, on its 2017 infrastructure report card.4

Over 3,200 of New Hampshire’s dams, most of which are over 100 years old, are considered to be “active” and are therefore regulated by the New Hampshire Department of Environmental Services (DES) Dam Bureau.5 Although the density of dams is highly concentrated in the southern part of the state (Figure 1), their distribution extends into the North Country, including the White Mountain National Forest, one of the state’s premier natural resource areas. Dam removals in New Hampshire are commonly triggered by safety issues, identified in a letter of deficiency issued by the Dam Bureau, but removal can also provide a path to river ecosystem restoration.6 As a result, communities, public officials, and dam owners in New Hampshire face complex decisions about how to balance sometimes competing interests, including dam safety, the cost of repair, historic significance, river and ecosystem health, fish passage, aesthetics, waterfront property values, hydropower, and public access for recreation. 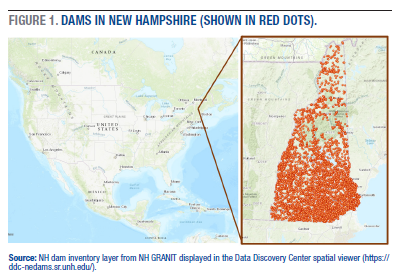 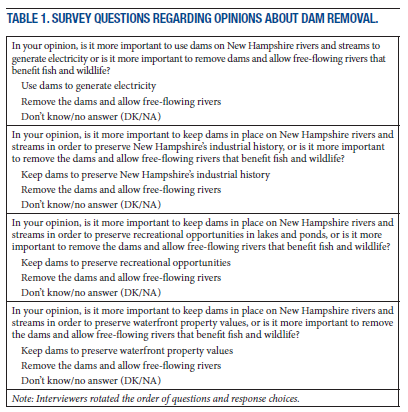 While engineers and public officials struggle with the scale of the challenge surrounding various dam management alternatives, including removal, what does the New Hampshire public think? To explore this question, we sought opinions about dam removal on a series of three Granite State Polls. Trained interviewers at the Survey Center of the University of New Hampshire conducted more than 1,500 telephone interviews with randomly sampled adults in three waves in February, April, and August 2018. Along with many other background and opinion items, the surveys asked specific questions about dam removal (Table 1).7 The questions were framed in terms of value tradeoffs, such as whether people would prefer to remove a dam for free-flowing rivers that benefit fish and wildlife or to keep a dam for each of four common purposes: lake- and pond-based recreation, maintenance of waterfront property values, maintenance and preservation of industrial history, and hydropower generation.

Figure 2 charts the responses to the four questions. In three of the four tradeoffs, more people chose the “remove dam” option; “keep dam” was favored only when the tradeoff was hydropower generation. In each question about 20 percent of respondents said they did not know, indicating a substantial knowledge gap that could be addressed by providing accessible information as an essential component of dam policy discussions.

Figure 3 charts the dam tradeoff responses from highest to lowest support. Support for dam removal is highest when the alternative involves keeping a dam to support property values. It may be that property values motivate only a small fraction of the public living on the lakes or ponds in question, or that others see greater value (to themselves or, conceivably, their property) from free-flowing rivers. A majority also supports dam removal when the alternative is preserving industrial history. An alternative argument in this case might be that dam removal could help to restore an early, pre-industrial history when New England rivers had salmon runs and could be traveled by canoe. The recreational alternative implicitly contrasts different kinds of recreation: rivers versus lakes as venues for fishing or boating. Arguments that dams should be kept for hydropower result in the lowest support for removal, and so clearly this topic should be addressed in the course of information campaigns about dam management decisions.

In survey research, it is always of interest to learn who gave different responses, in this case who favors removing dams as opposed to keeping them for different uses. Figures 4–7 chart support for dam removal across different population groups in the context of maintaining waterfront property values, preserving industrial history, maintaining lake- and pond-based recreation, and generating electricity from hydropower. Probabilities or p-values less than 0.05 indicate a statistically significant relationship.

Majorities of both men and women and of all age groups except the oldest favor removal of dams when the alternative is keeping them to maintain property values (Figure 4). There are small differences by education but larger differences by political identity: majorities of Democrats and independents but only 45 percent of Republicans favor dam removal in this context.

When asked about dam removal as opposed to keeping dams for either maintenance of industrial history (Figure 5), lake-based recreation (Figure 6), or hydropower generation (Figure 7), the pattern is similar to the property values question, with more female than male respondents supporting removal. One common trend across all four questions is that respondents who self-identify as either Democrats or independents are more likely to prefer removal compared to Republicans. However, fewer than half of respondents across all three party lines prefer removal when presented with the option of keeping dams for hydropower generation (Figure 7). For three of the four questions, we also observed younger respondents were more likely to prefer removal. This age pattern is less apparent when respondents were asked about keeping dams for hydropower generation, however (Figure 7).

We also tested for regional differences within New Hampshire (not shown) but did not find significant variation across regions.

Survey results indicate that New Hampshire residents favor keeping a dam for hydropower, but otherwise support dam removal above preservation of industrial history, maintenance of waterfront property values, or maintenance of lake- and pond-based recreation. Hydropower generation is a common argument used by interest groups wanting to keep a dam, and our data show that close to 50 percent of respondents want to keep dams for hydropower instead of removing them. Other research has shown that local interest groups who are in favor of keeping dams to preserve industrial history among other values (such as aesthetic and cultural values) have mobilized effectively to prevent dam removals in New England.8 Similarly, preservation of waterfront property values is a commonly heard argument in favor of keeping dams, but our data and results suggest this is not a majority view. The finding that, broadly speaking, younger people, women, and Democrats are more likely to support dam removal, as compared to older people, men, and Republicans, has implications for efforts to better inform people about these issues.

There are at least three noteworthy ways in which these results may be used in the decision-making process surrounding New Hampshire’s dams.

First, there is almost always vocal opposition to dam removal in New Hampshire by specific interest groups who may have a direct stake around how the dam is currently managed. Public meetings about dam decisions are often divisive and dominated by interest groups who are opposed to removal as a management option. However, research findings presented in this brief indicate that the general public has opinions about dam removal that may not necessarily align with the most prominent opinions presented in these forums. These results thus help “level the playing field” by providing preferences from a demographically representative sample of the state’s population. Given that dams are situated within natural resource areas that are stewarded in the public trust, interests of New Hampshire’s residents and taxpayers should play a role in informing decisions surrounding dam management.

Second, dam decisions in New Hampshire are often initiated in response to the dam’s age, deterioration, and safety concerns surrounding its conditions and possible catastrophic failure. The ASCE grade of C– for New Hampshire’s dams is indicative of how widespread this problem is around the state. Given the safety issues associated with the state’s dams and the high percentage of survey respondents who are unsure of their preferences surrounding the future of these dams, we believe results presented in this study can serve as an education tool to help raise awareness about dam-related issues.

Lastly, the public has significant influence over the future of many dams in the state, including municipally and state-owned dams. Of course, each dam has unique characteristics and its individual circumstances need to be considered as part of any decision about its fate, but statewide public preferences should also be considered for any dam that includes public funding or is owned by the state. The wide variations in dam removal preferences across the four tradeoffs, in addition to roughly 20 percent of respondents not knowing their preference, suggest that many people lack information about dam removal and have given little thought to the tradeoffs. Consequently, we see a need for thoughtful, active information campaigns and public education focused on the benefits and tradeoffs of various dam management options, including doing nothing. These survey results can inform decisions about how to best steward public resources and funding for maintaining or removing dams, as well as provide a context, representative of New Hampshire’s broader demographics, to complement opinions expressed by relatively small numbers of outspoken citizens at local meetings about specific dams.

3. Estimates about the number of dams in New Hampshire are highly uncertain. For example, the National Inventory of Dams estimates only about 641 dams in the state (Magilligan et al. 2016). The N.H. Department of Environmental Services (“Guidelines to the Regulatory Requirements for Dam Removal Projects in New Hampshire,” Concord, 2018) reports over 4,800 dams in the state, including the approximately 3,200 “active” dams. The New England Dams Database (Data Discovery Center, http://ddc-dams.sr.unh.edu/, 2019) corrected the N.H. Department of Environmental Services report by removing dams that were not co-located with a known stream location and reports 2,031 dams.

7. Response rates (see American Association for Public Opinion Research, Standard Definitions: Final Dispositions of Case Codes and Outcome Rates for Surveys, 9th ed. 2016) were determined to be 18 percent for the February poll, 19 percent for the April poll, and 17 percent for the August poll.