New Hampshire received a significant net inflow of people from other U.S. states between 2013 and 2017 according to new Census Bureau estimates. The average annual domestic migration gain was 5,900 between 2013 and 2017. In contrast, only about 100 more people moved to New Hampshire than left it for other U.S. destinations annually during the Great Recession and its aftermath between 2008 and 2012. The transformation was greatest among those in their 20s, who had an average annual migration gain of 1,200 between 2013 and 2017 compared to an average loss of 1,500 annually from 2008 to 2012. Among those in their 30s, the net annual migration gain nearly doubled during the same period, while the net inflow of those 40 to 49 diminished slightly. As more family age adults migrated to New Hampshire, their children fueled a significant increase in the net influx of those under age 20. In contrast, among those age 50 and over, the net outflow of people from the state increased slightly. Modest immigration from other countries at all ages supplemented the domestic migration gains analyzed here. These recent domestic and immigrant migration gains are both modest, but they provide additional human and social capital to a state challenged by an aging workforce and population. 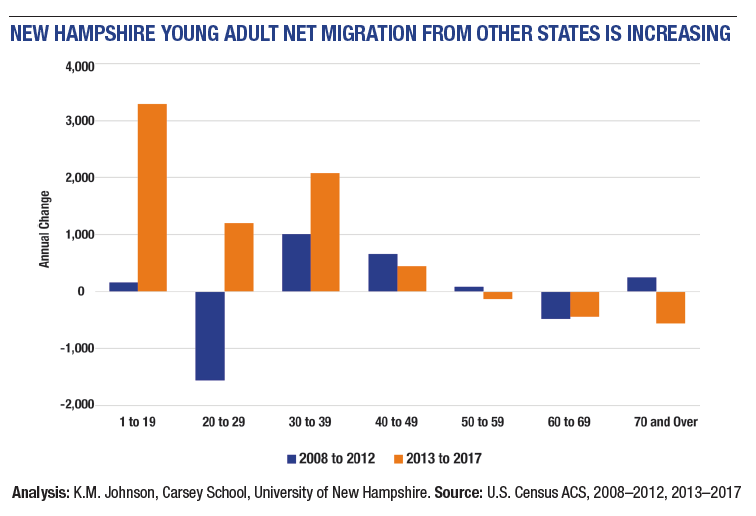