Last year New Hampshire’s population grew modestly even though deaths exceeded births. Migration from other U.S. destinations accounted for most of the state’s population gain.

The population of New Hampshire grew by 6,200 to 1,360,000 between July of 2018 and July of 2019 according to new Census Bureau estimates. The state’s population increased even though there were fewer births than deaths in the state last year. New Hampshire was one of only four states in which deaths exceeded births last year. The others were West Virginia, Maine, and Vermont. The number of deaths has increased significantly in recent years due to rising mortality among New Hampshire’s growing senior population, but drug-related deaths to young adults are also contributing. In contrast, births diminished modestly in the state because there are relatively few women of child-bearing age and fertility rates are low in New Hampshire, as they are nationwide. With fewer births than deaths, migration accounted for all of New Hampshire’s population gain last year. Most of this migration gain has come because more people are moving into New Hampshire from other states than leaving it. Such domestic migration has been important to the state’s growth recently. Over the past three years, an annual average of 3,800 more people moved into New Hampshire from other U.S. destinations than left it. New Hampshire also received an annual average of 2,200 net immigrants from other nations over the past three years. 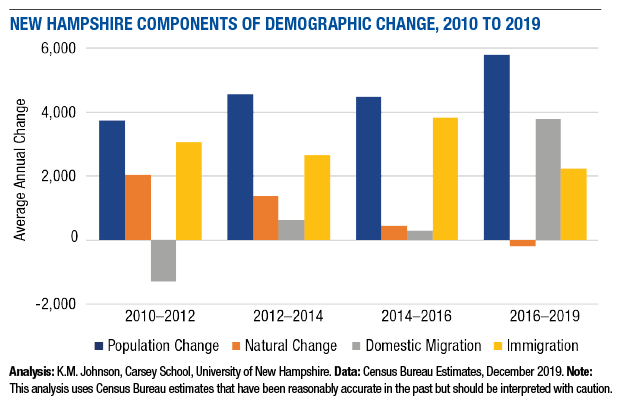 These recent migration gains are modest compared to those in the 1980s and 1990s, but much larger than earlier in the decade when New Hampshire lost more migrants to other U.S. destinations than it gained. In a state where deaths now exceed births, migration is critical to New Hampshire’s future.

Kenneth M. Johnson is senior demographer at the Carsey School of Public Policy, Class of 1940 professor of sociology at the University of New Hampshire, and an Andrew Carnegie Fellow. His research was supported by the New Hampshire Agricultural Experiment Station in support of Hatch Multi-State Regional Project W-4001 through joint funding of the National Institute of Food and Agriculture, U.S. Department of Agriculture, under award number 1013434, and the state of New Hampshire. The opinions are his and not those of the sponsoring organizations.