Employment, Poverty, and Public Assistance in the Rural United States

Nearly 75 percent of low-income rural counties in the United States are in the South.

More than 80 known historic cemeteries are at risk of damage or complete destruction by sea-level rise. The potential damage to unknown, yet-to-be discovered burial grounds is also of concern.

When asked to describe the rural United States, people usually mention serene and sprawling farmlands, rolling hills, open spaces, and safe, idyllic communities in which to raise children.1  Although there are a lot of acres in rural America, just 6 percent of rural workers depend on agriculture. Twenty-two percent depend on manufacturing,2 and the rest work in retail, sales, health care, construction, transportation, banking, services, tourist industries, and government—similar to their counterparts in cities and suburbs.

As in cities and suburbs, rural living is also diverse.3 It takes place in chronically poor areas, like Appalachia, the Mississippi Delta, and the “Black Belt” of Alabama, and in struggling areas in the Pacific Northwest, Midwest, and Northeast where manufacturing has declined and agriculture has consolidated. It also takes place in amenity-rich areas located on the edges of urban centers—places such as the Rocky Mountains and Northern New England—into which city-dwellers have migrated in search of cleaner air, lower housing costs, and enhanced recreation.

A large body of research focuses on the divide between the rural and urban United States. These studies tell us that poverty is higher in the rural United States, incomes are lower, and job growth is nearly non-existent.4  But, as demographer Kenneth Johnson states, “‘Rural America’ is a deceptively simple term for a remarkably diverse collection of places.”5

In this brief, we provide a glimpse of the economic and demographic characteristics of life in the rural United States (see Box 1 for definitions of rural and delineations of income levels). Using data from the American Community Survey (ACS), we compare those living in low- and lower-middle-income counties (counties with average family incomes below the median for all counties in the United States) to those living in upper-middle- and high-income counties. Additionally, we compare counties at the extremes, where median incomes are in the bottom and top 10 percent of the income distribution. 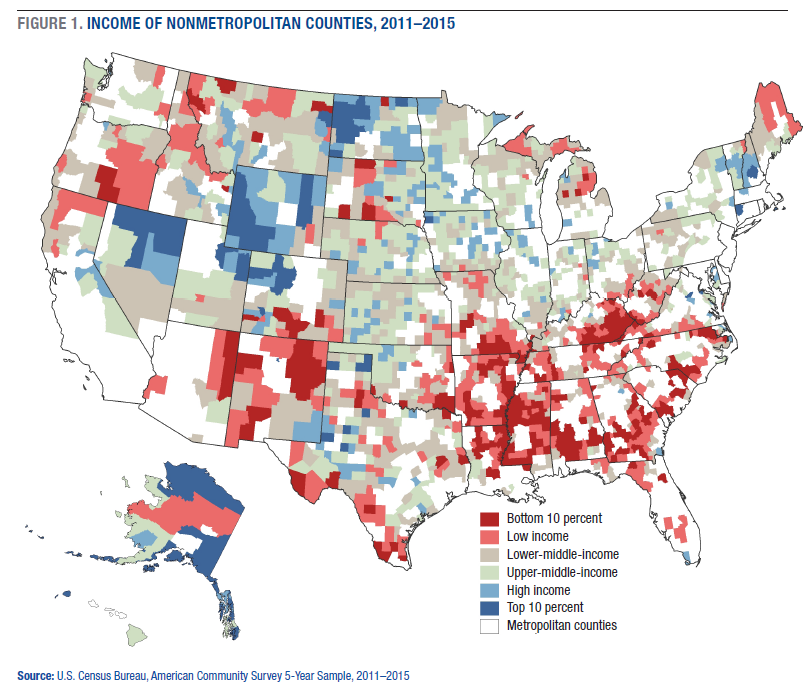 Our research also reveals that differences in income levels coincide with differences in demographics. People in low-income rural areas are less educated and less likely to be employed, and those who do work are more likely to do so in manufacturing and production and less likely to do so in management, business, science, arts, recreation, and entertainment. Their incomes are also more likely to fall below the federal poverty line, and they rely more heavily on public support. 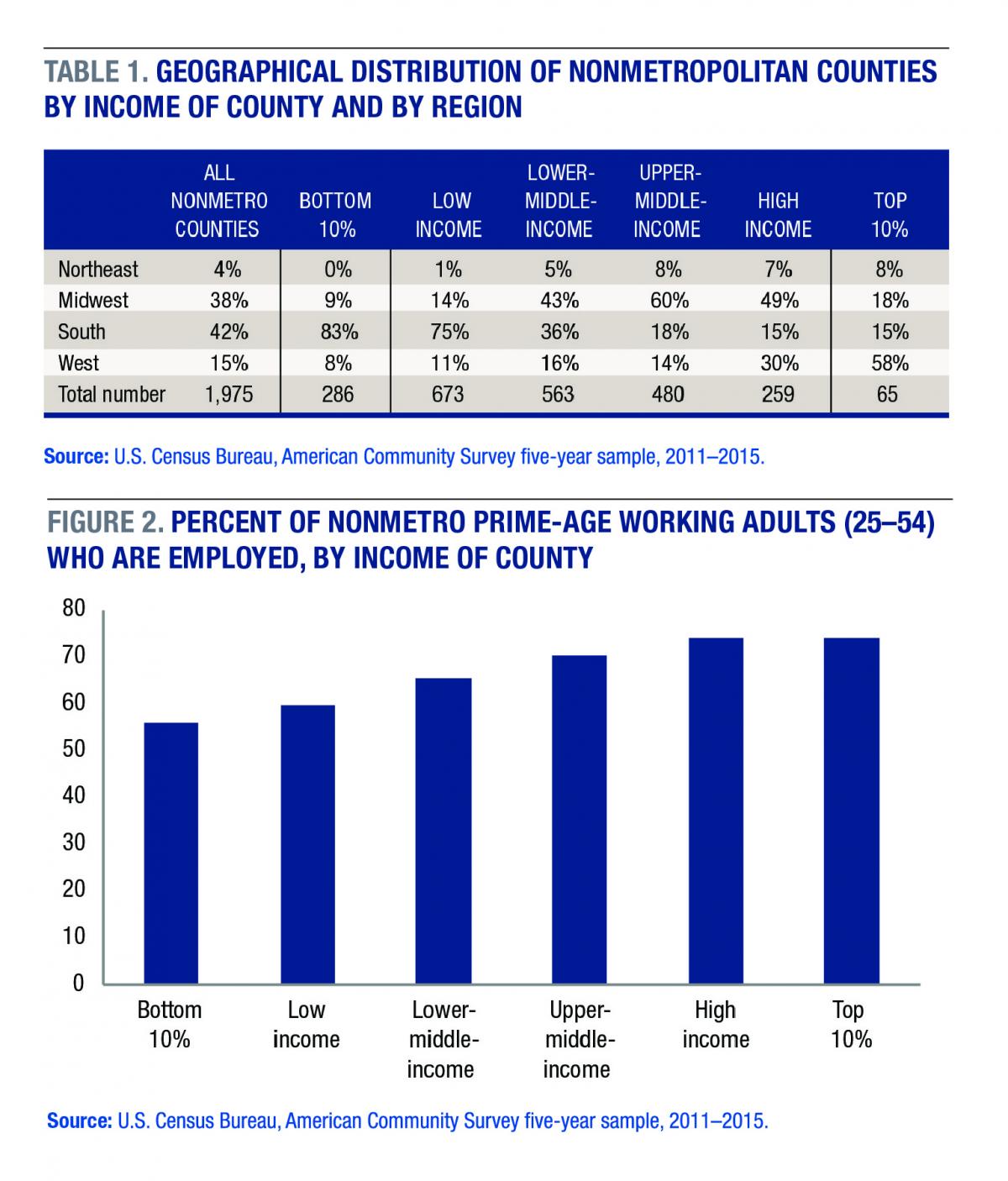 Low-Income Rural Counties Are Concentrated in the South

Differences in Education and Family Structure

The poverty rate is higher in low-income rural counties. One-quarter of people in low-income rural areas live below the official federal poverty line, compared to just 11 percent in high-income rural areas (Table 2). The poverty rate in very-low-income rural counties is three times higher than it is in very-high-income rural counties (28 percent compared to 9 percent). Residents in lower-income counties tend to rely more heavily on the social safety net.The federal Earned Income Tax Credit (EITC) is one of the most important anti-poverty programs for low-income working Americans.8 In 2015, the average federal EITC was $3,186 for a family with children, enough to lift 9.8 million people out of poverty.9 Those who receive the credit tend to use it to meet short-term expenses, such as rent or car repairs.10 The credit is particularly important to rural families because they are more likely to work in low-wage jobs11 and have higher rates of child poverty.12  As Figure 3 shows, nearly a third of rural people in low-income counties and 36 percent of those in very-low-income counties claim the EITC.13

In sum, the EITC, SNAP, and public health insurance are particularly important to those living in less affluent rural regions of the United States. 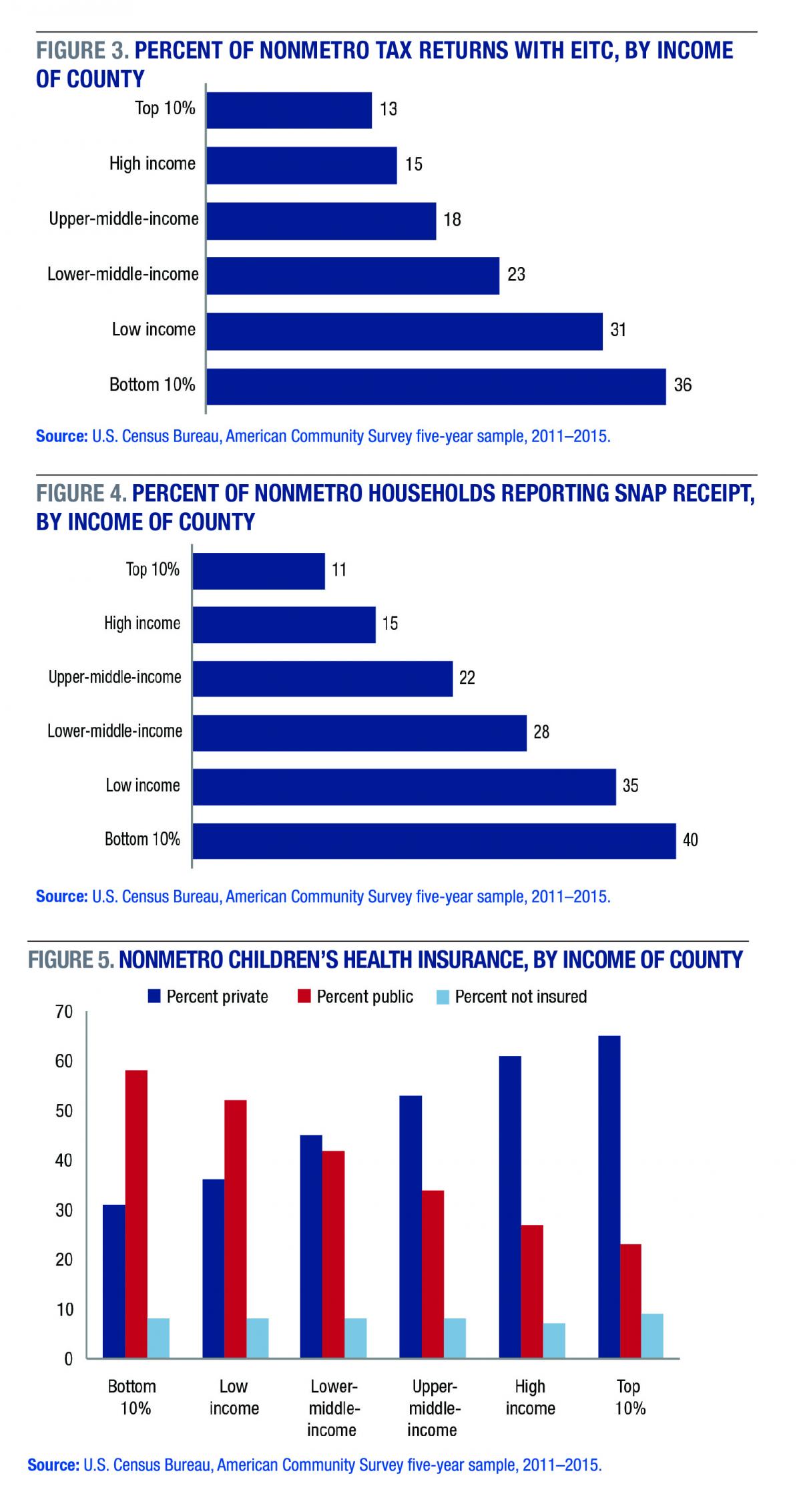 Implications for Rural Families and Children

This brief compares affluent to less affluent rural counties. It shows that differences in the rural United States tend to fall along income lines. Compared to those living in higher-income areas, those living in lower-income rural areas are less educated and less likely to be employed, and those who are employed are more likely to work in production and manufacturing and less likely to work in management, business, sciences, the arts, and recreation. They also depend more heavily on public-sector supports. In short, our research contradicts the dominant image of a homogenous rural United States.

What does this mean for rural children and families? Nutritional assistance, public health insurance, and the EITC are most highly used among those living in low-income rural counties, and cutbacks in federal safety net programs and the proposed repeal of the Affordable Care Act (ACA) may disproportionately harm low-income people in the rural United States. The ACA led to the lowest percentage of uninsured Americans on record,20 and rural people experienced gains in coverage that were as large, if not more substantial, than Americans elsewhere. Although policy makers tend to focus on people living in the urban United States, our results show that those living in the rural United States and particularly in low-income counties, may have even more to gain from public health insurance and other social safety-net programs.

Rural and Urban
We define counties as rural based on the Office of Management and Budget classification. Urban counties are those located within an urbanized core or any adjacent counties that have a “high degree of social and economic integration with the core.”6 All other counties are considered nonmetropolitan or “rural.” Of the 3,143 counties in the United States, 1,976 are rural and 1,975 are used in this analysis.7

The data for this project come from the 2011–2015 five-year sample of the American Community Survey (ACS). The ACS is a yearly, 1 percent sample of all U.S. households that includes various sociodemographic indicators. The five-year sample used in this brief describes the period between January 2011 and December 2015. 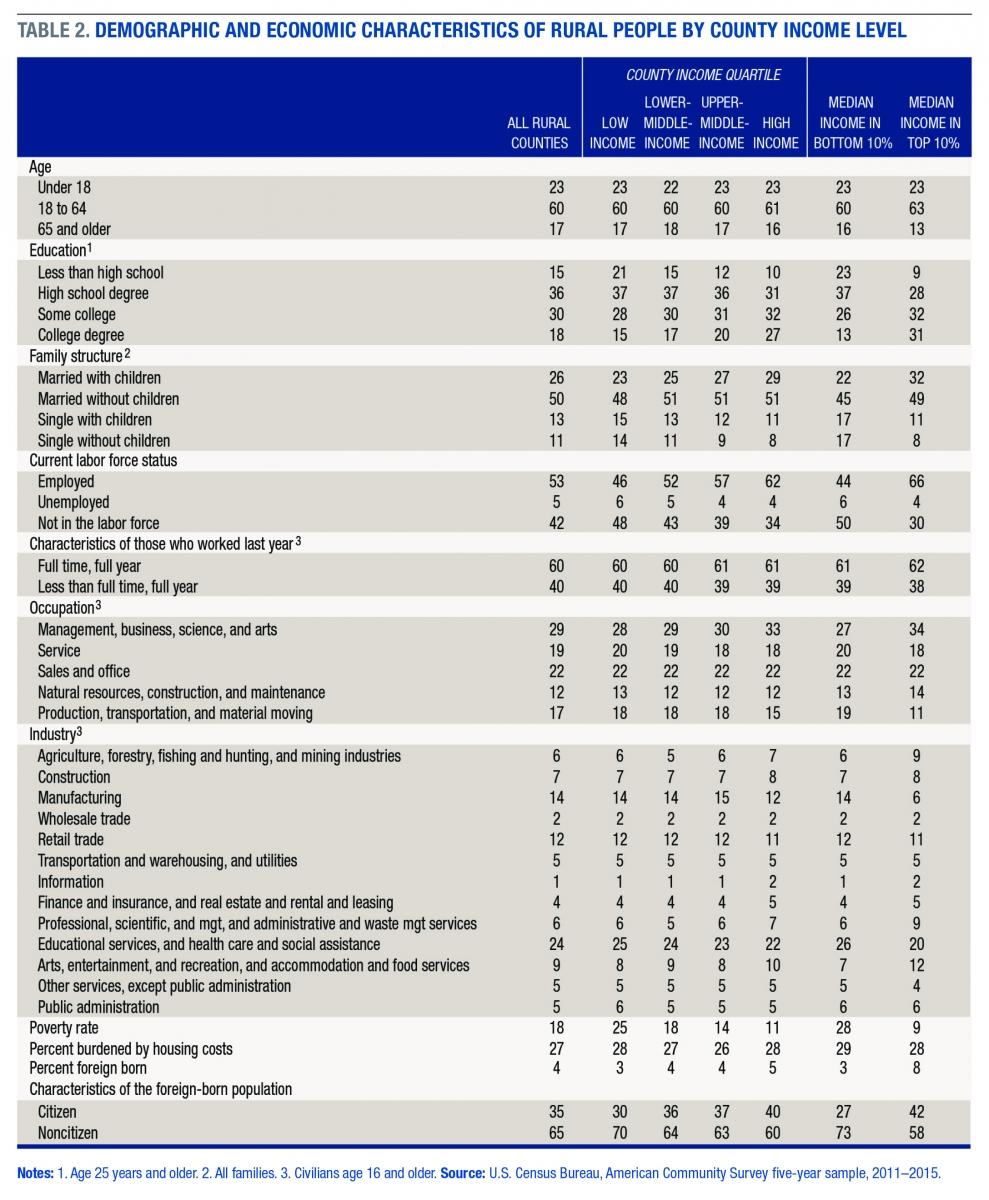 2. For more information about dependency, see U.S. Department of Agriculture, “Rural America at a Glance,” 2016, https://www.ers.usda.gov/publications/pub-details/?pubid=80893.

4. “Six Charts That Illustrate the Divide Between Rural and Urban America,” The Conversation, 2017, https://theconversation.com/six-charts-that-illustrate-the-divide-between-rural-and-urban-america-72934?sa=google&sq=rural&sr=1.

5. Kenneth Johnson, “Where Is ‘Rural America’ and What Does It Look Like?” The Conversation, 2017, https://theconversation.com/where-is-rural-america-and-what-does-it-look-like-72045.

13. Only those with earned income are eligible for the EITC.

14. Jessica A. Carson and Paul Anskat, “Rates of SNAP Receipt Stabilize or Drop in All Regions for First Time Since Great Recession,” National Issue Brief No. 87 (Durham, NH: Carsey School of Public Policy, 2015).

15. It is beyond the scope of this brief to explore the labor force participation of SNAP recipients. However, current proposals to implement work requirements would no doubt influence the likelihood of receipt. They would also likely have a larger negative effect on poor rural residents in places where lower-on-average income limits opportunities.