Is Rural America Failing or Succeeding? Maybe Both

Watch a Webinar with the Authors

Commentators often lament the decline of rural America by contrasting the substantial population gains in urban areas to the modest gains in rural areas and the diminishing share of the population that lives there.1 The nonmetropolitan (rural) population peaked in 1940, when 75 million people, or 57 percent of all Americans, lived in small towns, in the open countryside, or on farms. Today, only 46 million people reside in nonmetropolitan areas, a record low 14 percent of the population. Many assume that a constant tide of the rural population has been flowing into cities, but the shift is not so simple. The spatial boundaries that separate rural and urban America are highly fluid.

After Each Census There Are Fewer Nonmetropolitan Counties

Reclassification has been geographically widespread but is more evident in the South and West and less so in the Great Plains and New England (Figure 1). 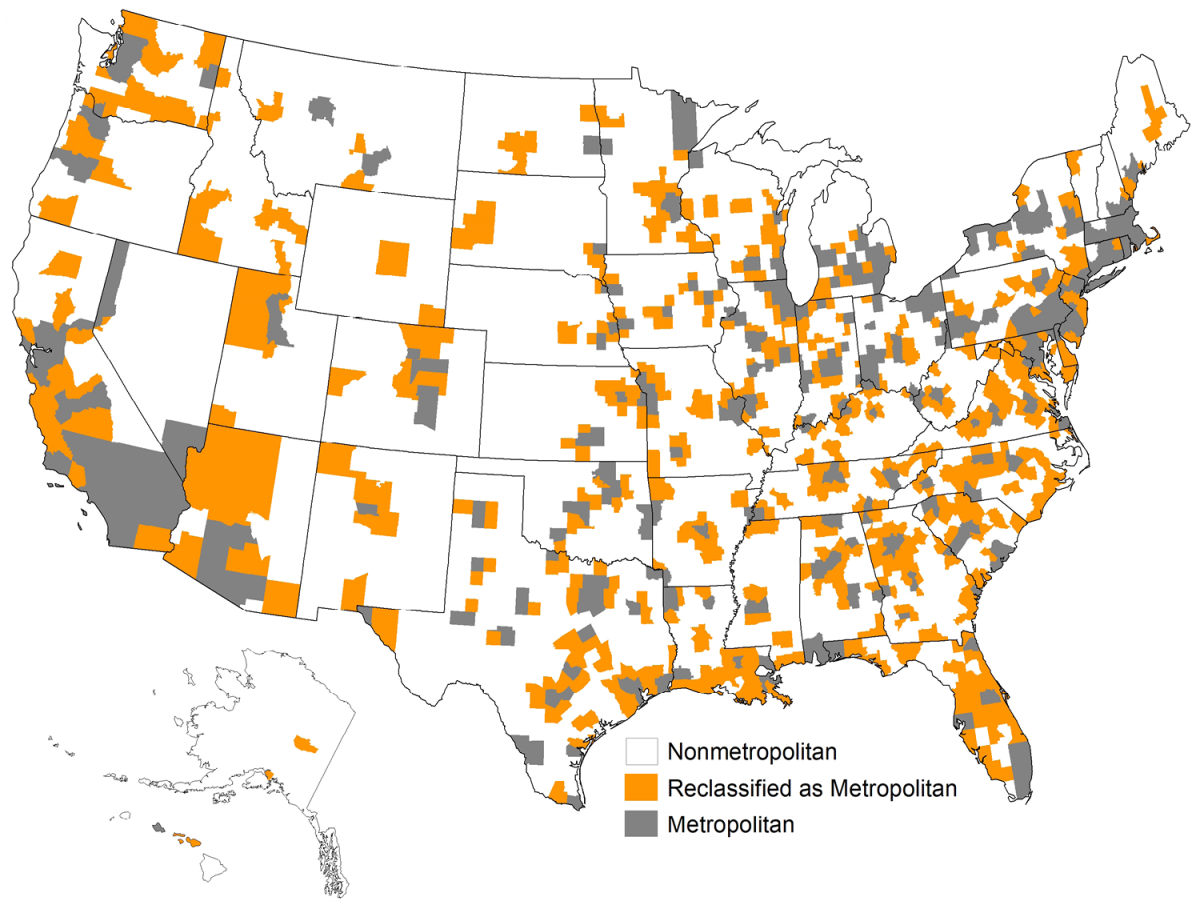 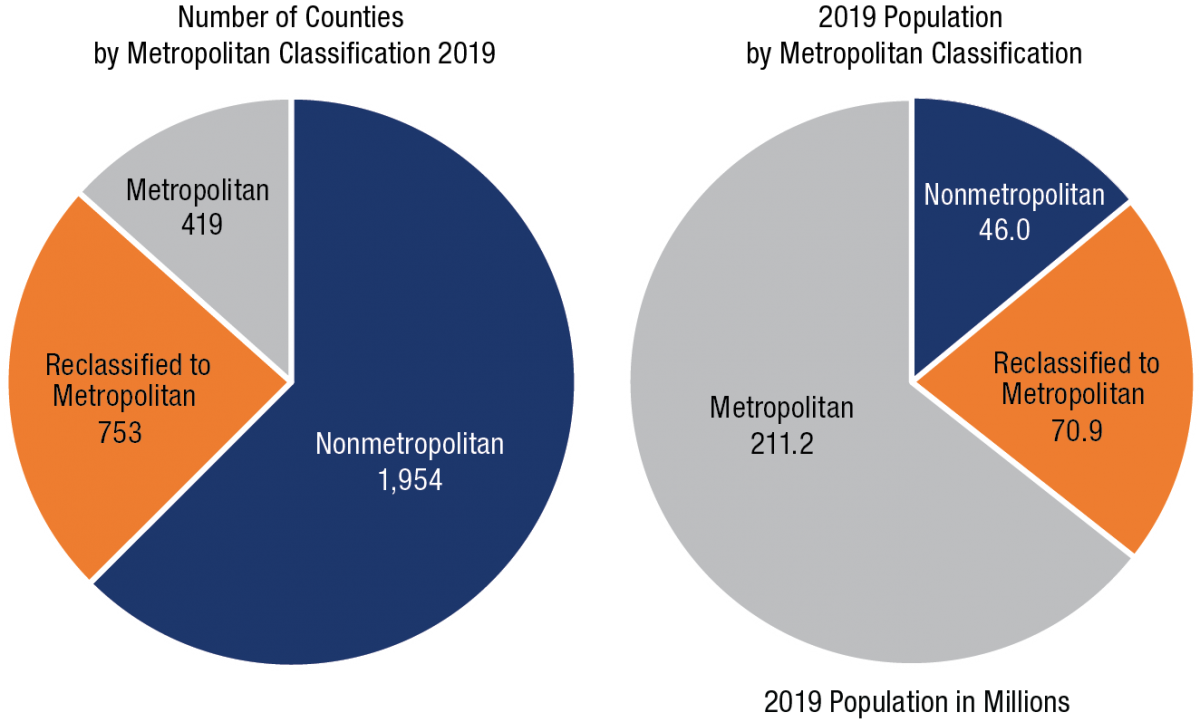 Figure 3. Population Change by Decade Between 1970 and 2019 by Metropolitan Classification 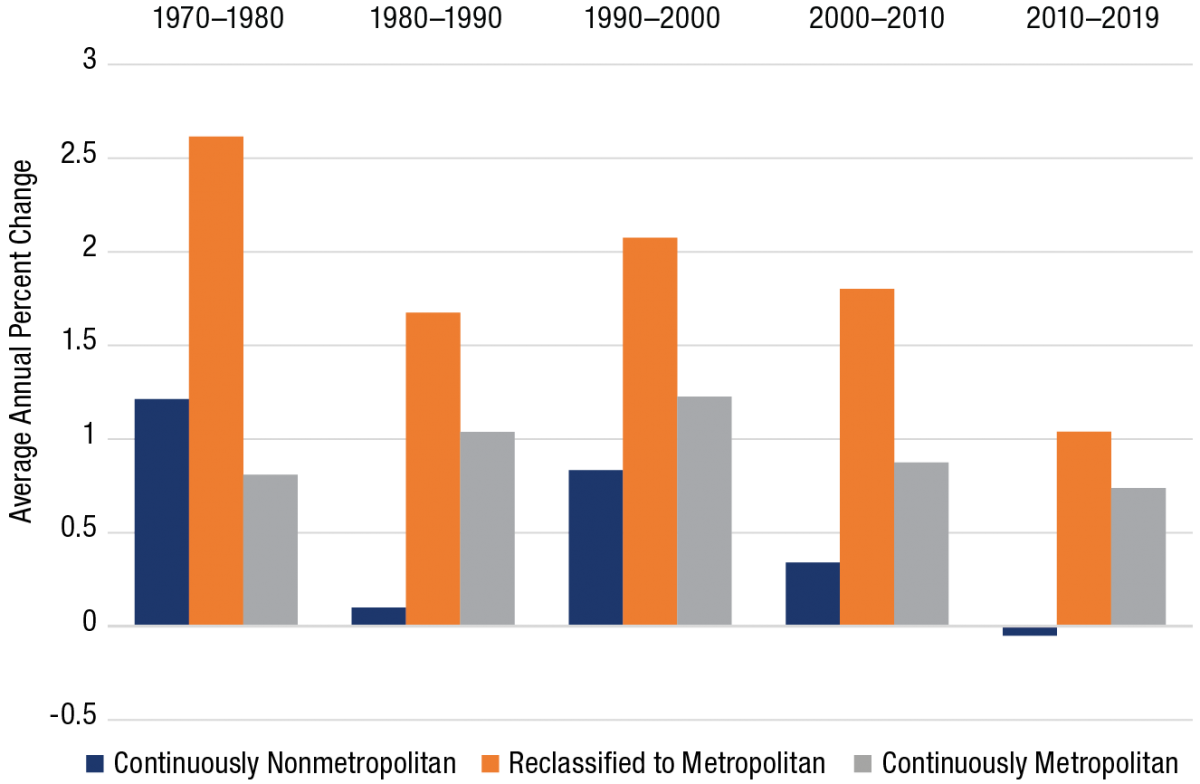 The ongoing “metropolitanization” of America through reclassification is a demographic paradox—one not often appreciated by policymakers, the media, or researchers. It is a tale of two rural Americas. One includes many of the demographic winners—nonmetropolitan counties with a history of and potential for population growth and economic development that have been siphoned off, decade after decade, into metropolitan areas, along with some remaining nonmetropolitan counties—especially those proximate to metropolitan areas or with appeal to amenity or lifestyle migrants—that continue to gain population and prosper. But in the other rural America are many counties with limited potential for future growth, especially those in remote and isolated rural areas that depend on agriculture and low-wage manufacturing or service industries. It is these counties that drive the commonplace narrative of chronic rural decline and economic malaise.

The interpretative problems caused by this highly selective reclassification are not limited to population change. Reclassification also affects the usual interpretations of changing levels of rural poverty, population aging, educational quality, and economic growth. For example, nonmetropolitan counties that have transitioned to metropolitan status typically include higher percentages of college-educated people, higher per capita incomes, lower poverty rates, and lower percentages of older people. Over time, the net transfer of education and income reflected in this transition has exacerbated rural-urban disparities in human capital as well as population, adding to the narrative of rural decline.

At a minimum, our results should temper some of the pessimism about the state of rural America. The common narrative of dying rural areas turns out to be a story of rural success as much as anything. Many growing counties are no longer counted as rural, having now joined the universe of metropolitan counties. For urbanizing rural areas, the demographic future looks bright.4 We are much less sanguine about the many remote, thinly populated, and declining areas “left behind” in rural America, where the prospects for future population gain and development seem more limited than ever.

This brief summarizes the authors’ research in K.M. Johnson and D.T. Lichter, “Metropolitan Reclassification and the Urbanization of Rural America,” Demography (2020), https://doi.org/10.1007/s13524-020-00912-5. Kenneth Johnson’s work was supported by his Andrew Carnegie fellowship and by the New Hampshire Agricultural Experiment Station in support of Hatch Multi-State Regional Project W-4001. The opinions presented here are those of the authors and do not necessarily reflect the views of the funding organizations. Barbara Cook of the Carsey School of Public Policy provided geographic information system support.

Kenneth M. Johnson is senior demographer at the Carsey School of Public Policy, Class of 1940 Professor of Sociology at the University of New Hampshire, and an Andrew Carnegie fellow (ken.johnson@unh.edu).

Daniel T. Lichter is a senior fellow at the Carsey School of Public Policy and Ferris Family Professor in the Departments of Policy Analysis & Management and Sociology at Cornell University (dtl28@cornell.edu).