Voting and Attitudes Along the Red Rural–Blue Urban Continuum

Political commentary often divides the nation into two partisan zones, urban and rural, but our analysis demonstrates the rural–urban gradient is a continuum, not a dichotomy.

This rural–urban continuum is not just political; it also reflects social attitudes.

Democratic support increased across the entire rural–urban continuum in 2018.

Watch a Webinar with the Authors

In attempting to explain the unexpected results of the 2016 presidential election, political analysts have emphasized the differences in party affiliation and social attitudes between Republican (conservative) rural America and Democratic (liberal) urban America. Yet, our study of the 2018 congressional election demonstrates that voting patterns and political attitudes vary across the spectrum of urban and rural areas in the United States.1 Rural America is not a monolith, nor is urban America. The rural–urban gradient is better represented by a continuum than a dichotomy.2 At one pole of the continuum are large, densely settled urban cores, where Democrats have consistently been the most successful. At the other end are rural counties far from a metropolitan area, without large towns, where Republican candidates command their greatest support.

Figure 1. Percent Democratic in 2018 and 2016 House Elections and 2016 Presidential Election Along the Rural–Urban Continuum 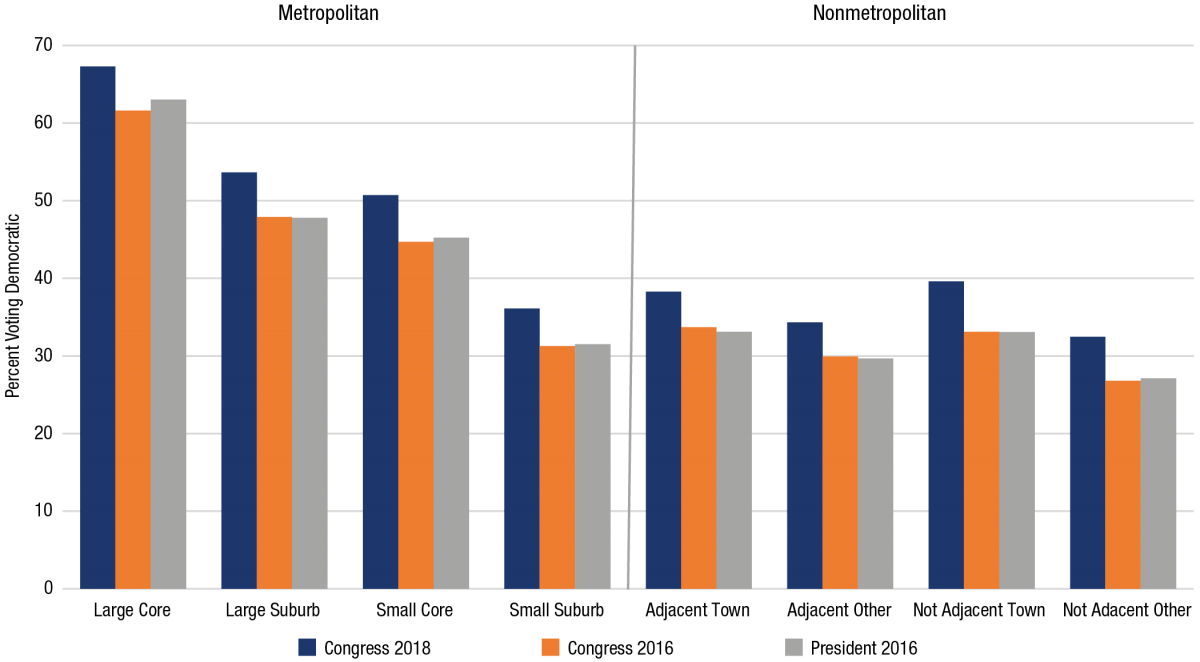 Metropolitan areas include counties containing an urban core with a population of 50,000 or more (central city), along with adjacent counties that are highly integrated with the core county. All other counties are classified as nonmetropolitan. To characterize the rural–urban continuum, we subdivided metropolitan and nonmetropolitan counties into eight categories:

Overall, Democrats received 53.2 percent of the House vote in 2018 compared to 47.5 percent in 2016. Democratic support increased across the entire rural–urban continuum, not just in the traditional strongholds of the party in urban cores. In each of the eight categories along the continuum, the proportion of the vote for Democrats increased by 5 to 6 percentage points.

The 2016 congressional elections mirrored the 2016 presidential results, and the rural–urban gradient is evident at both levels. Democratic support was greatest in large urban cores, diminished in large suburban and smaller urban core counties, and then declined sharply in nonmetropolitan counties, especially those counties without a town as well as suburban counties of small metropolitan areas.

Social Attitudes Along the Rural–Urban Continuum

Differences in attitudes along the rural–urban continuum may well account for the distinct voting patterns evident above. On the four scales we used—attitudes on race and gender, isolationism, the role of government, and abortion (see the Data and Methods section for more detail)—residents of major metropolitan areas represent one end of the continuum and display attitudes that differ significantly from those who live in other parts of the country (Figure 2). On all four scales, attitudes of residents in the suburbs of large metro areas and in smaller metro cores represent a middle ground, with attitudes near the national average—in other words, less liberal than those of residents in large urban cores, but far less conservative than those of residents of small metro suburbs and nonmetropolitan areas. In rural areas, the presence of a large town in the county tends to moderate attitudes somewhat, and the most conservative views are consistently found among those in counties without a large town. As in the voting data, there is an inflection point in the suburbs of small metropolitan areas, where attitudes are more consistent with nonmetropolitan counties containing a town than they are with the other three metropolitan county types.

Figure 2. Attitudes Along the Rural–Urban Continuum 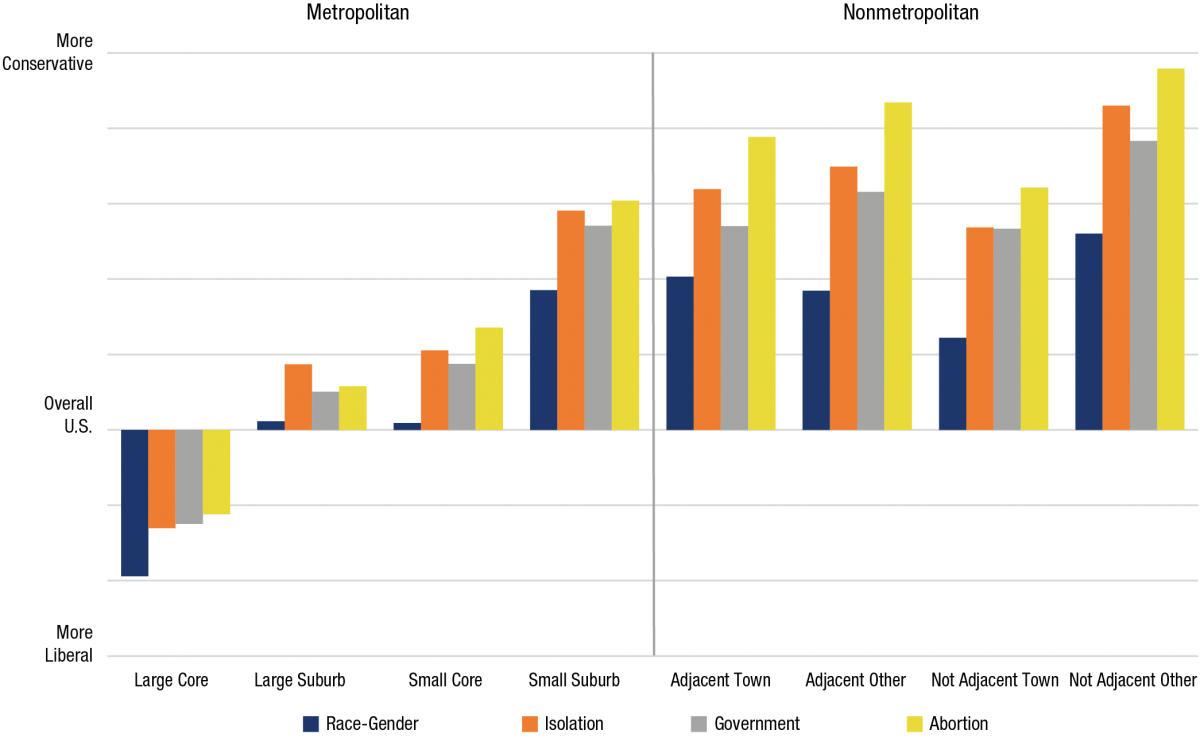 Though a rural–urban continuum is evident on all four attitude scales, it is the most pronounced as a straight slope in terms of abortion. On this scale, there was a clear and linear urban–rural gradient with a single exception (Not Adjacent Town). Rural residents, especially those in rural counties without a large town, were much more likely to favor restrictions on abortion. Residents of nonmetropolitan counties with a town as well as those residing in small metropolitan suburbs also favored more restrictions on abortions, though these residents were slightly less conservative. Residents of the suburban counties of large metro areas, as well as those in small metropolitan core counties, displayed far more moderate attitudes—close to the national average. In contrast, residents of large metropolitan core counties held views significantly more pro-choice than any other group on the urban–rural continuum.

All told, attitudinal data closely mirrored voting data. The remarkable consistency of this gradient across a wide range of opinion items along the rural–urban continuum helps to demonstrate why House election results varied so significantly and so consistently.

Rural–Urban Is a Continuum, Not a Dichotomy

The 2018 midterm results provided good news for Democrats, but they also reflected the same rural–urban continuum evident in the 2016 elections. The language of political polarization often leads observers to divide the United States into two opposing partisan zones, urban and rural. But county-level voting and survey data demonstrate that political differences exist not as a bifurcation but rather along a continuum in both urban and rural areas. And these differences are not simply a matter of partisanship but are displayed across a variety of social and political attitudes. For example, on the end of the spectrum with large metropolitan core counties, inhabitants voted Democratic in large majorities in 2018; they were most likely to agree that government should play an important role in solving social problems and that the United States should be fully engaged with the world; they tended to be strongly in favor of women’s reproductive rights; and they were the most likely to be concerned about race and gender inequality. On the other end of the spectrum, rural voters, especially those in counties without a large town, mostly voted Republican and were likely to express views quite different than those of metropolitan voters on all four scales.

In the middle of the continuum are the suburbs of large metropolitan areas and small metropolitan core counties, but this oft-described political battlefield is not a single entity but rather a part of this continuum. In the suburbs of metropolitan areas of a million or more, Democrats can count many residents among their supporters. But the outskirts of smaller metro areas, where much of the population is widely dispersed, strongly resemble rural America politically—not just in terms of partisanship but across a variety of social and political attitudes. The continuity of the rural–urban continuum across numerous elections and a broad range of attitudinal items underscores the risks of dichotomizing the country into rural and urban. In the many tightly contested areas where the results of an election may depend on a small fraction of the voters, it is imperative that politicians, the media, and researchers recognize the utility of viewing both rural and urban areas as part of a continuum, not as a dichotomy.

We examine political data along the rural–urban continuum using aggregate county voting trends in the 2018 and 2016 congressional elections and the 2016 presidential election. We combined these election results with opinion data to identify attitudes of individuals along the rural–urban continuum. More details of the methods and data used are available in our recent article.4

We use counties as the unit of analysis, classifying each county as metropolitan or nonmetropolitan. Metropolitan areas include counties containing an urban core with a population of 50,000 or more (central city), along with adjacent counties that are highly integrated with the core county. There are 1,163 metro counties and 1,949 counties classified as nonmetropolitan. We use the terms rural and nonmetropolitan interchangeably here, as we do the terms urban and metropolitan. To characterize the rural–urban continuum, we subdivided the counties into eight categories that represent population concentration and proximity, from the densely settled large cities in metropolitan areas of a million or more to the most remote rural periphery (see Box 1). Because of difficulties with boundary changes in Alaska’s boroughs, we excluded respondents from that state.

We obtained election data from Leip’s online atlas,5 and attitude data are from the 2018 Cooperative Congressional Election Study (CCES), a national stratified sample survey that queried 60,000 respondents6 about demographic characteristics and political attitudes.7 We classify these respondents based on where their county fits along the rural–urban continuum.

Using a factor analysis of items included on the CCES, we constructed four scales to measure the attitudes of respondents in terms of: (1) perceptions of racism, racial resentment, and gender equality; (2) isolationist sentiments, including support or opposition to immigration, trade and tariffs, energy consumption, and climate change; (3) the role of government in a variety of domestic policy areas, including tax increases, stricter controls on guns, and expansion of government-provided health care; and (4) abortion.

This brief summarizes the authors’ research in K.M. Johnson and D.J. Scala, “The Rural–Urban Continuum of Polarization: Understanding the Geography of the 2018 Midterms,” forthcoming in The Forum (2020). Kenneth Johnson’s work was supported by his Andrew Carnegie fellowship. The opinions presented here are those of the authors and do not necessarily reflect the views of the funding organizations.

Kenneth M. Johnson (ken.johnson@unh.edu) is senior demographer at the Carsey School of Public Policy, Class of 1940 professor of sociology at the University of New Hampshire, and an Andrew Carnegie fellow.

Dante J. Scala (dante.scala@unh.edu) is professor of political science at the University of New Hampshire and a fellow at the Carsey School of Public Policy.