Public Awareness of Scientific Consensus on Climate Change Is Rising

About 2/3 of respondents in recent polls recognize that most scientists agree about the effect of human activities on climate change.

Public awareness of this scientific consensus is gradually rising.

Among scientists who study the Earth’s climate, there is overwhelming agreement that humans are causing rapid change.1 Surveys find that the U.S. public underestimates the extent to which scientists agree on this point,2 but public awareness is gradually rising (Figure 1). A repeating question placed by Carsey School researchers on surveys since 2010 asks:
Which of the following two statements do you think is more accurate?

Figure 1 tracks what percentage answered accurately that most scientists agree, and shows an upward trend averaging about 2.4 points per year.3 On the nationwide Polar, Environment, and Science (POLES) survey conducted in August 2016, for example, 66 percent said they thought that most scientists agree. Only 26 percent thought there is little agreement, and 7 percent said they do not know (Figure 2). New Hampshire responses generally are within a few points of the nationwide surveys,4 as is often the case with climate-change topics.5

Publication of major scientific reports that synthesized work by thousands of scientists, such as those from the Intergovernmental Panel on Climate Change in 2013,6 or U.S. Global Change Research Program in 2017,7 are not followed by sudden moves in the graph. Such reports, along with countless individual studies by scientists across many disciplines, contributed in a more gradual way to growing public awareness of the scientific consensus. 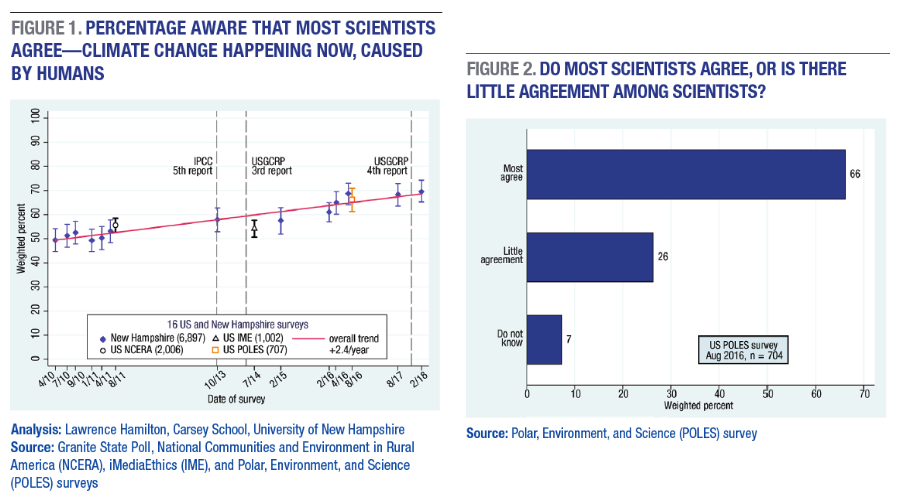 3. The upward trend of about 2.4 points per year is statistically significant (p < 0.001), tested using robust statistical methods suitable for these mixed data.