The Opioid Crisis in Rural and Small Town America

In 2016, opioid mortality rates were higher in urban than in rural counties, particularly in the Midwest, but rates have increased more in rural than in urban counties over the past two decades. 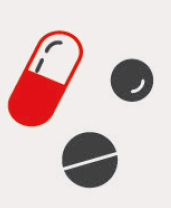 Over half of drug overdoses involve multiple drugs.

Over the last two decades, opioid1 overdose deaths have increased over 400 percent, reaching 45,838 in 2016.2 Although the crisis is not disproportionately worse in rural3 than in urban America, opioid mortality rates have grown faster in rural areas, particularly in the Northeast and Midwest. Rural areas also face unique challenges in dealing with the crisis, including a smaller health care infrastructure than is available in more densely populated areas, community and family factors, and labor market stressors.

The Geography of Rural Opioid Mortality

Rural Challenges for Dealing With the Opioid Crisis

Even though opioid mortality rates are not disproportionately higher in rural America, rural areas face unique infrastructural, social, and economic challenges when dealing with the crisis. 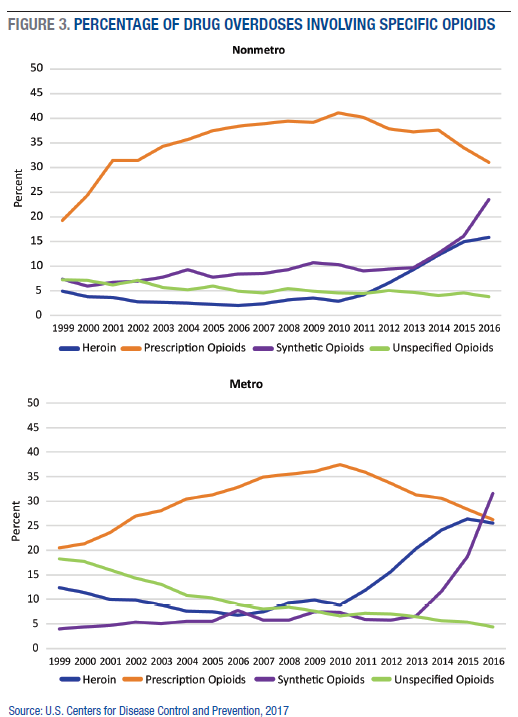 In terms of social factors, stigma, family ties, and community interactions create important challenges for rural areas. Although stigma is not unique to rural communities, it can be especially pronounced in small towns. Difficulty maintaining anonymity in communities where “everyone knows everyone” can sometimes cause people to discontinue treatment or avoid it altogether.5 On average, rural communities may be strengthened by their comparatively higher levels of community attachment and social interaction and social support, but there is wide divergence in these social resources across the United States. The lack of recreational opportunities (such as parks and after-school programs) is a known risk factor for youth substance use.6 Although strong family support can improve the odds of recovery, social and family networks in rural areas also facilitate prescription drug diversion (sharing, trading, selling). Indeed, in regions with widespread and intergenerational economic disadvantage, like rural Appalachia, opioids sometimes serve as a form of currency.7

The two-decade increase in opioid mortality has corresponded with significant economic stressors in some rural areas. Rural labor markets are less diversified than urban ones, making them more vulnerable to economic shifts. Over the past 40 years, employment restructuring has led to the movement of many livable-wage production jobs out of rural areas, while high-wage, high-skill service, ﬁnance, and technology-based employment has become more concentrated in urban cores.8 This shift has resulted in fewer and lower-wage employment opportunities for rural residents.9 Unstable labor markets contribute to substance misuse. Selective out-migration of highly-skilled and college-bound young adults10 has intensified the geographic clustering of multigenerational economic distress in many rural areas, making it difficult for these places to muster the financial and human capital to fight back against the opioid scourge.

Where Do We Go From Here?

As with other measures of well-being, there is substantial variation in the opioid problem across rural America. Failing to account for this variation may lead to the misdirection of resources and inappropriate policy solutions. Policy initiatives thus far have been largely ineffective at addressing the opioid crisis in many of the hardest-hit rural communities, and the recent surge in fentanyl overdoses in large urban areas may be a precursor of what to expect in at-risk rural communities in the coming years.

Strategies for addressing the opioid crisis must consider treatment, recovery, harm reduction, and prevention. Thus far, strategies have disproportionately focused on downstream efforts aimed at treating persons addicted to opioids or quelling the supply of prescription opioids. Upstream approaches—like evidence-based, school-based prevention programs—are lacking in rural areas.11 Economic development is also sorely needed in many of the rural areas hit hardest by the opioid crisis. It is no coincidence that overdose rates are highest in places with the most disadvantaged labor markets that have hemorrhaged jobs over the past three decades.12 Existing interventions are unlikely to be effective without addressing the underlying social and economic determinants, including poverty, unemployment, and declining opportunities for upward mobility, that are plaguing the hardest-hit areas. 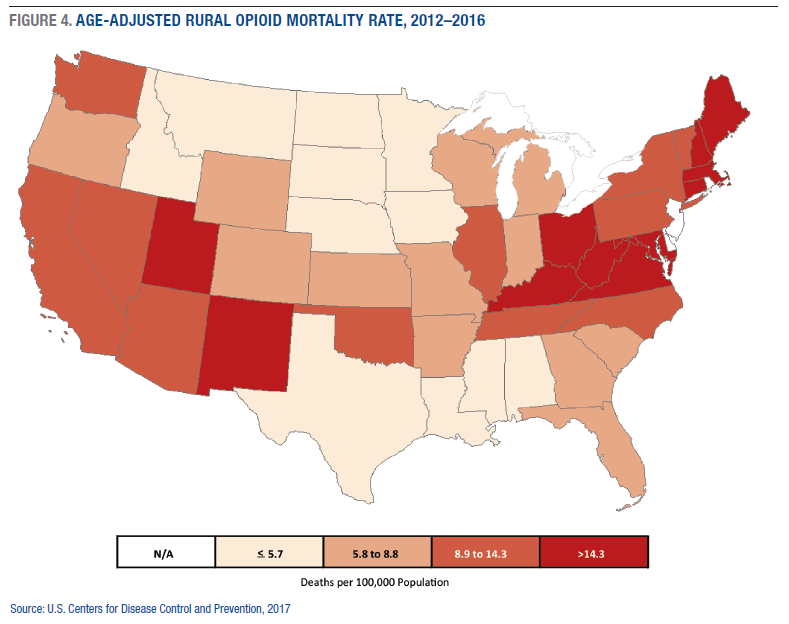 Data are from the U.S. Centers for Disease Control and Prevention’s Wide-Ranging Online Data for Epidemiologic Research (WONDER) multiple cause-of-death (MCD) files, 1999–2016. Specific causes of opioid-related death are detailed in the peer-reviewed article.13 All rates are age-adjusted and represent the number of deaths per 100,000 population.

2. Data are from the U.S. Centers for Disease Control and Prevention, National Center for Health Statistics, “Multiple Cause of Death 1999–2016,” 2017, https://wonder.cdc.gov/mcd-icd10.html.

The authors thank Michele Dillon, Beth Mattingly, and Laurel Lloyd for helpful suggestions on earlier drafts. Dr. Monnat acknowledges funding from the USDA Economic Research Service, USDA AFRI, and the Institute for New Economic Thinking, as well as support from the W-4001 Committee, which is funded by the Western Association of Agricultural Experiment Station Directors (WAAESD). The views expressed in this brief represent those of the authors and should not be attributed to these funding agencies.