Domestic migration gains are accelerating in other metro areas. 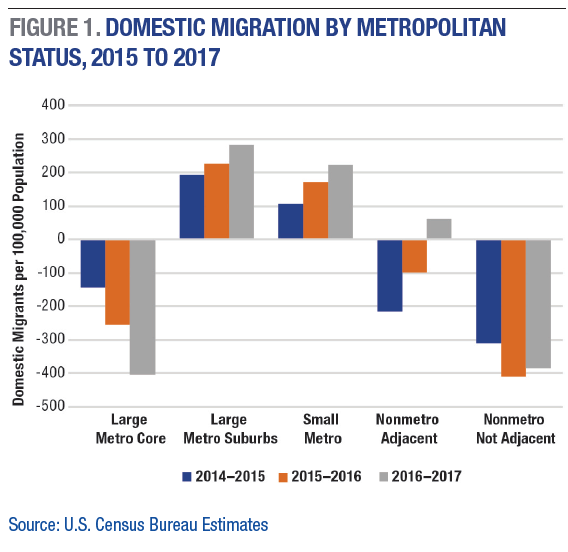 Growth rates vary widely across rural America. The fastest growing rural counties have recreational and scenic amenities and many also appeal to retirees. Such counties have traditionally attracted domestic migrants, but such migration sharply diminished during the Great Recession. Migrants are again coming to these recreational and retirement areas. The domestic migration gain here last year was three times as large as it was three years ago.

Between July 2016 and July 2017, there was a record number of deaths (2,746,000) and relatively few births (3,978,000). The excess of births over deaths (1,232,000) is the lowest in 35 years. Even though there are more women of prime child bearing age now than ten years ago, births dropped by 8.4 percent from a record 4,316,000 in 2006–2007 during the economic boom. There is no evidence of any recovery from this fertility decline in the new data. Recent National Center for Health Statistics data show that fertility rates remain near record lows. Nearly 600,000 fewer babies were born last year than would have been the case had the fertility rates just before the recession been sustained Young women, in particular, are having fewer babies. And, 2.1 million fewer women between the ages of 20 and 39 have had their first child than would have been expected given pre-recession fertility patterns. It is not yet clear whether these births are being delayed or whether they will be foregone.

With fewer births and record deaths, there were insufficient births to offset deaths in 1,200 counties (38.7 percent). Natural decrease (more deaths than births) is occurring in 45 percent of the nation’s rural counties and 24 percent of urban counties. This year, deaths exceeded births in two entire states: more people died than were born in both Maine and West Virginia.

This research was funded by Dr. Johnson’s Andrew Carnegie Fellowship from the Carnegie Corporation of New York and by the New Hampshire Agricultural Experiment Station.