The incremental gains at each point along the continuum were modest, but in a tightly contested election small changes in the vote matter.

Watch a Webinar Featuring the Authors

(Revised November 17, 2020) To become the forty-sixth president of the United States, Joe Biden excelled at the margins. In swing state after swing state, he won small majorities that were just slightly larger than Trump’s winning percentages four years earlier,1 and he performed just a bit better than his predecessor, Hillary Clinton, particularly in large metropolitan areas where he received his strongest support. President Donald Trump’s greatest success occurred in the remote parts of rural America, though in 2020 his majority here was smaller than in 2016.

Voting Along the Rural–Urban Continuum

Metropolitan areas include counties containing an urban core with a population of 50,000 or more (central city), along with adjacent counties that are highly integrated with the core county. All other counties are classified as nonmetropolitan. To characterize the rural–urban continuum, we subdivided metropolitan and nonmetropolitan counties into eight categories:

Figure 1. Percent of Vote for Democratic Presidential Candidate Along the Rural–Urban Continuum, 2008 to 2020 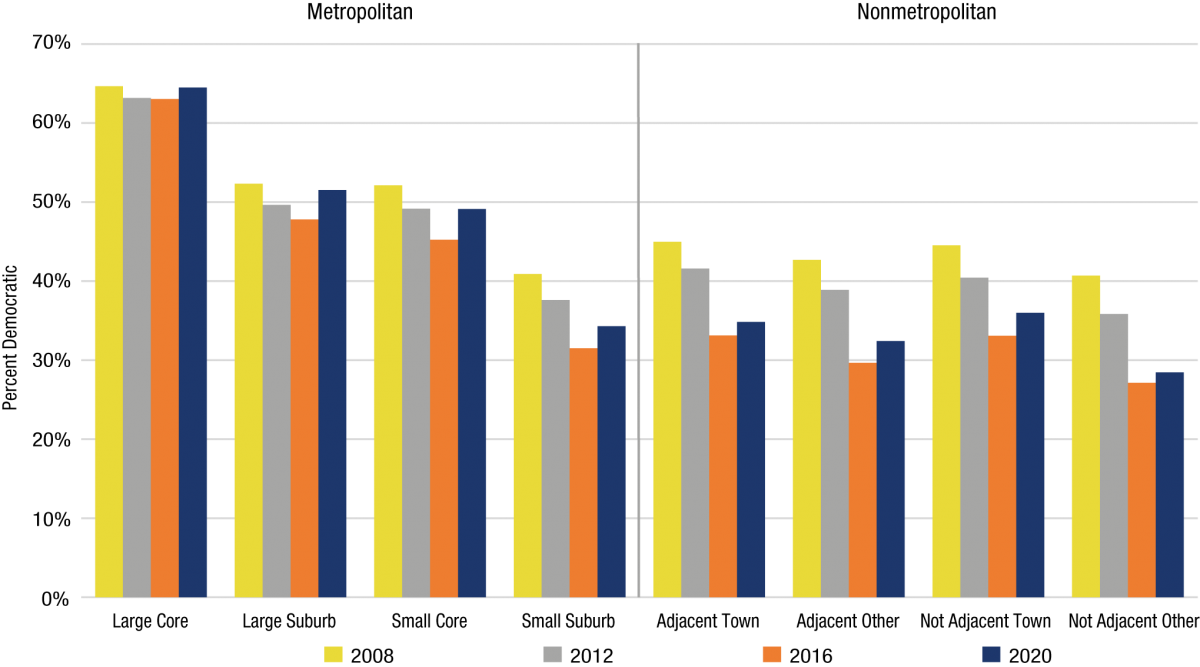 In sum, the 2020 presidential election results provided good news for Democrats, but they also reflected the same rural–urban continuum evident in the 2012 and 2016 elections. The language of political polarization often divides the United States into two opposing partisan zones—urban and rural.  Yet our analysis demonstrates that rural America is not a monolith, nor is urban America. Rather, the rural–urban gradient is better represented by a continuum. At one pole are large, densely settled urban cores, where Democrats have consistently been the most successful. At the other end are remote rural counties far from a metropolitan area, without large towns, where Republican candidates command their greatest support. Along this entire continuum, Biden received a larger share of the vote in 2020 than Clinton had in 2016. Though the incremental gains at each point along the continuum were modest, in such a tightly contested election these small fractional changes in the vote were the difference between victory and defeat in 2020 just as in 2016. But make no mistake: Biden did not realign the political map, but he did manage to move the lines just a bit.

We examine voting along the rural–urban continuum using aggregate county voting data from the 2020, 2016, 2012, and 2008 presidential elections. We use counties as the unit of analysis, classifying each county as metropolitan or nonmetropolitan. Metropolitan areas include counties containing an urban core with a population of 50,000 or more (central city), along with adjacent counties that are highly integrated with the core county. There are 1,163 metro counties and 1,949 counties classified as nonmetropolitan. We use the terms rural and nonmetropolitan interchangeably here, as we do the terms urban and metropolitan. To characterize the rural–urban continuum, we subdivided the counties into eight categories that represent population concentration and proximity, from the densely settled large cities in metropolitan areas of a million or more to the most remote rural periphery (see Box 1). We obtained election data from Leip’s online atlas,4 though we did supplement the Leip data in two states. The data are current as of November 17, 2020. Minor data revisions are likely for some counties as official tallies are submitted. We are confident the overall trends reported here are correct, but our results should be considered preliminary until final data are released.

Kenneth Johnson’s work was supported by his Andrew Carnegie fellowship. The opinions presented here are those of the authors and do not necessarily reflect the views of the funding organizations.

Kenneth M. Johnson (ken.johnson@unh.edu) is senior demographer at the Carsey School of Public Policy, Class of 1940 professor of sociology at the University of New Hampshire, and an Andrew Carnegie fellow.

Dante J. Scala (dante.scala@unh.edu) is professor of political science at the University of New Hampshire and a fellow at the Carsey School of Public Policy.