Beyond Urban Versus Rural

Although rural voters and urban voters are often portrayed as polar opposites, their differences are best understood as a continuum, not a dichotomy.

From the largest urban cores to the most remote rural counties, we find significant variations in voting behavior that persist over the last five presidential elections.

Communities across the region face difficult questions about what they are willing to lose and what efforts they are able and willing to make to protect vulnerable cultural heritage sites and graveyards from sea-level rise.

In the aftermath of the 2016 presidential election, commentators focused on the political polarization separating residents of urban and rural America. Certainly rural–urban differences are only one of several factors that contributed to the surprising 2016 outcome, but rural voters are rightly acknowledged as one key factor in Donald Trump’s electoral success. Yet, defining 2016 as the tale of two Americas—one urban, one rural—hinders a nuanced understanding of the country’s political geography. Many political commentators mistakenly caricature rural America as a single entity, but our research summarized here shows that complex variations in voting patterns persist among both urban and rural places.1 Rural America is a remarkably diverse collection of places including more than 70 percent of the land area of the United States and 46 million people.2 Both demographic and voting trends in this vast area are far from monolithic. Here we examine voting patterns over the last five presidential elections, treating rural–urban differences as a continuum, not a dichotomy.

Presidential Voting Along the Rural–Urban Continuum

At one end of the continuum are urban core counties of large metropolitan areas, where Democrats received their greatest support in the last five presidential elections. Al Gore and John Kerry averaged slightly less than 60 percent of the vote in these areas in 2000 and 2004 (Figure 1). Barack Obama boosted the Democrats’ urban vote share in 2008 and 2012, and Clinton maintained it in 2016. Next on the continuum from Democratic to Republican counties are the suburbs of these large metropolitan areas where both Obama in 2012 and Clinton earned slightly less than a majority (49.6 and 47.8 percent), respectively.

The voting patterns in smaller urban areas are similar to those in the larger metropolitan areas (Figure 2). In 2012, Obama received nearly half of the vote in the urban cores of smaller metropolitan areas. Clinton received slightly less. As with the larger metropolitan areas, the suburbs of smaller urban areas are more strongly Republican. It is at this point along the rural–urban continuum that the contrast between earlier elections and 2016 is evident. Here the gap between Democratic support in 2012 and 2016 widened—to Clinton’s detriment. Many of these small suburban counties contain the sparsely settled urban periphery that is more rural than urban. 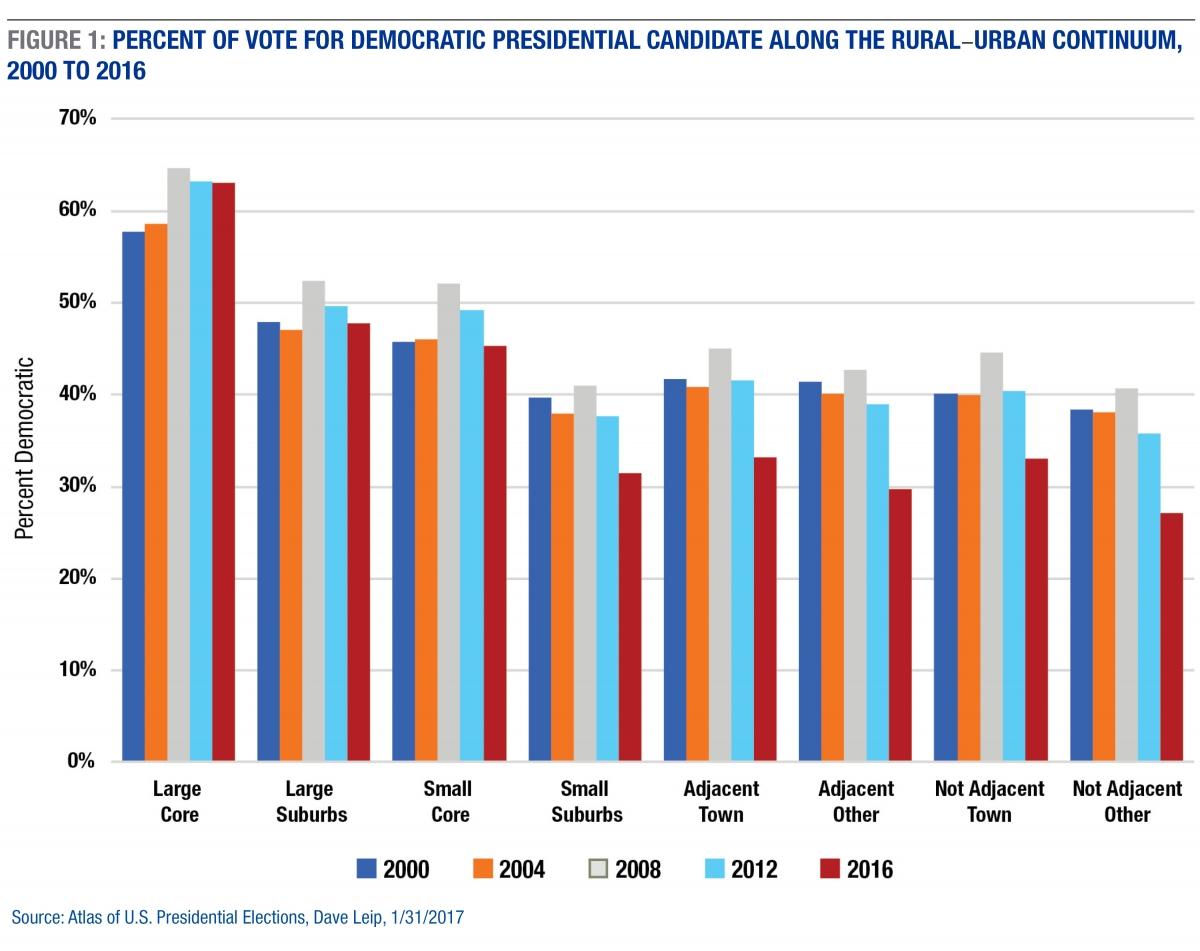 In sum, through the last five presidential elections, voting patterns were consistent along our rural–urban continuum. Democrats did best at the urban end of the continuum and Republicans at the rural end. What is distinctly different in 2016 is that Hillary Clinton did far worse across the entire rural end of the continuum than any Democratic candidate in the previous four presidential elections. In total, Clinton received 2.1 million fewer votes in rural America than Obama did four years earlier, even though 531,000 more votes were cast there in 2016. She also received 338,000 fewer votes in the suburban counties of small metro areas on the rural–urban edge, even though 450,000 more votes were cast. 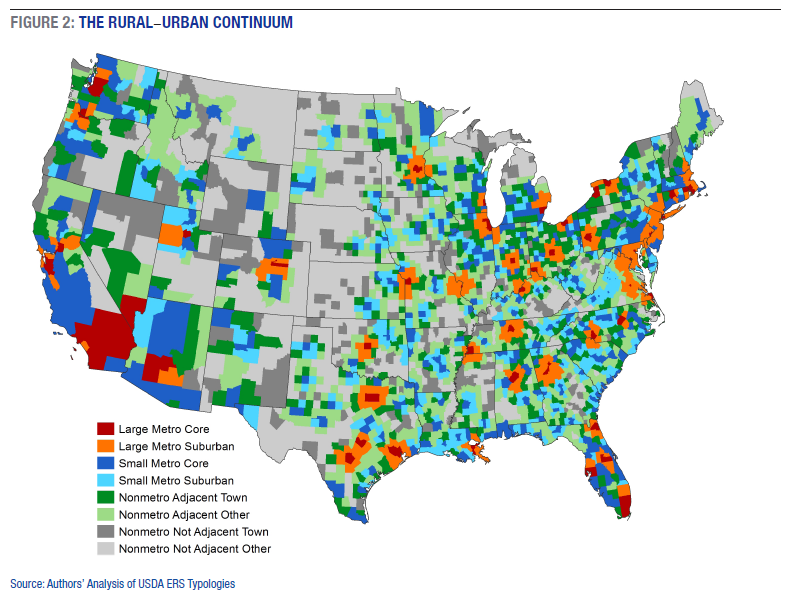 The residents of large urban core counties are the base of the Democratic Party: they are the most likely to identify as Democrat, vote Democrat, and hold liberal attitudes on a host of social and political issues.3  Democrats also enjoy considerable support in the suburbs of these large urban areas, as well as in the cores of smaller metropolitan areas, though they received less than 50 percent of the vote in each. Outside of these areas, Democrats faced a slippery slope. On the outer edges of smaller urban areas and in the vast rural regions beyond, Republicans find much friendlier territory.

Clinton nearly matched Obama’s performance in the three most populous areas of our continuum, where she received 55.9 million of the 106.7 million votes cast. But her campaign faced defeat by a thousand cuts along the rest of the urban-rural continuum, where she received just 8.8 million of 28 million votes cast. Certainly, these rural vote totals are dwarfed by those in urban areas. But, from the suburban periphery of smaller urban areas to the most far-flung rural areas, Clinton’s inability to match the performance of any Democratic candidate since at least 2000 contributed to her defeat in crucial swing states such as Florida, Michigan, North Carolina, Pennsylvania, and Wisconsin.

Though many commentators argued that the faster population growth and growing diversity on the urban side of the rural–urban continuum would give Democrats a significant advantage in 2016, the election demonstrated that what happens at the rural end of the continuum remains important.

To characterize the rural–urban continuum, we subdivided counties into eight categories from the densely settled cores of large urban areas to the most remote rural counties.4 The sixty-seven large core metropolitan counties include the major city and inner suburbs of urban areas containing more than 1 million people. More than 98.5 million people reside there. An additional 79.3 million people reside in the 365 large suburbs counties that adjoin these large core counties. The 339 urban core counties of metropolitan areas of less than 1 million were classified as small core. They contain 78.9 million residents. An additional 392 small suburbs counties with 18.6 million residents surround these small metro cores.

2. K.M. Johnson, “Where is ‘Rural America’ and what does it look like,” The Conversation, February 20, 2017, https://theconversation.com/where-is-rural-america-and-what-does-it-look....

3. Scala and Johnson, “Political Polarization along the Rural–Urban Continuum,” 2017.

Barbara Cook of the Carsey School of Public Policy provided research support and produced the map for this publication. Johnson’s work was supported by his Andrew Carnegie Fellowship from the Carnegie Corporation of New York. The content is solely the responsibility of the authors and does not necessarily represent the official views of the Carnegie Corporation or the Carsey School of Public Policy.