Views of a Fast-Moving Pandemic

New Hampshire residents who approve of President Trump’s handling of the response to the COVID-19 pandemic and those who regularly watch Fox News are less likely than others to have made major changes in their routines due to COVID-19, according to a new poll.

A large majority (77 percent) say they trust science agencies such as the Centers for Disease Control for information about the coronavirus.
Watch a Webinar
with the Authors

The Carsey Perspectives series presents new ways of looking at issues affecting our society and the world. Any opinions, findings, and conclusions or recommendations expressed in this material are those of the authors and do not necessarily reflect the views of the sponsors or publisher.

Testifying to Congress on March 11, 2020, Dr. Anthony Fauci, director of the National Institute of Allergy and Infectious Diseases, said, “Even in areas of the country where there are no or few cases, we’ve got to change our behavior.”1 In this brief, we discuss the results of a statewide poll to assess the extent to which New Hampshire residents are heeding this advice, as well as whether competing messages from scientists and medical experts on the one hand and political leaders like President Trump on the other might affect the likelihood that individuals alter their activities.

Conducted March 17 to 26, the Granite State Panel survey asked respondents whether they approve of President Trump’s and N.H. Governor Chris Sununu’s handling of the response to the COVID-19 pandemic, what they think about the federal government’s ability to respond, how they regard information from science agencies such as the U.S. Centers for Disease Control and Prevention (CDC), and whether they have changed their daily routines because of the coronavirus.

Public opinion surveys commonly include questions about approval of current political figures such as the president and the governor. For this COVID-19 survey, we asked more specifically:

Generally speaking, do you approve or disapprove of the way President Trump is handling the coronavirus (COVID-19) situation? 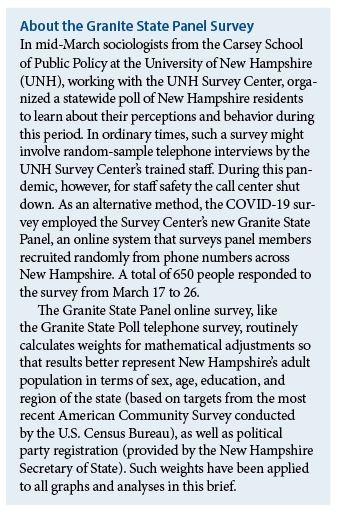 Figure 2 shows the response to a question about the federal government more generally:

The spread in Figure 2 is less polarized than Trump’s rating in Figure 1, but also leaning toward low confidence: 46 percent say they are somewhat or very confident in the government’s ability, whereas 54 percent say they are not very or not at all confident. Only 1 percent expressed no opinion (percentages in this chart and others may not add to 100 percent because of rounding).

The Trump administration’s response has come under much criticism for not following advice from scientists and medical experts in such key areas as testing, health-worker protections, medical preparations, and individual behavior. The CDC, the premier U.S. science agency responsible for pandemic response, was the topic of another survey question:

As a source of information about the coronavirus, would you say that you trust, don’t trust, or are unsure about science agencies such as the Centers for Disease Control (CDC) that study infectious diseases?

Have You Changed Your Daily Behavior?

As the COVID-19 outbreak intensifies, both information and misinformation spread as rapidly as the virus itself. Although people express more trust and confidence in science agencies compared with the president or government during this crisis, amid the mixed messages whose advice are they following? At the time of the survey, a stay-at-home policy had been recommended by scientists but not yet adopted by Governor Sununu for New Hampshire, so we asked about voluntary changes:

Have you changed your daily routine in any way specifically because of the coronavirus?

•  No changes in my daily routine

•  Minor changes only, such as washing hands more often

Figure 4 charts the results. Seventy-seven percent, similar to the fraction saying they trust the CDC, reported that they were making major changes such as leaving home less often. Eighteen percent reported only minor changes such as hand washing; 6 percent said they had made no changes. The major-change fraction was already high in the survey’s first days (March 17–21) and did not rise significantly through the 26th. Although “leaving home less often” is less strict than the governor’s later “stay at home” order, and even the latter has many practical exceptions, these reports of voluntary behavior in line with scientific recommendations provide some encouragement. The trajectory of confirmed COVID-19 cases in New Hampshire over the weeks ahead will reveal the effects of Governor Sununu’s stay-at-home order of March 26.

Although a large majority of respondents indicated that they made major changes such as leaving home less often, this still leaves a minority that did not—and that group poses a critical challenge for efforts to slow the spread of the disease. In this context of mixed scientific and political messaging related to COVID-19, who stayed home, and who did not? Figure 5 suggests a partial answer, showing the percentage who report making major changes such as leaving home less often, separately for respondents who strongly or somewhat disapprove, and strongly or somewhat approve, of President Trump’s and Governor Sununu’s handling of the coronavirus situation. In terms of President Trump, although majorities of both disapproving and approving groups said they changed their routines, a statistically significant 17-point gap separates their behavior. In contrast, there is no difference in behavior related to approval of Governor Sununu. (As seen in Figure 1, the more neutral categories of Trump approval were chosen by very few people, making the data too sparse for statistical analysis.)

Media outlets play a vital role in conveying public heath recommendations. Figure 6 depicts a striking 24-point gap in behavior related to one specific media outlet: frequency of watching Fox News, which throughout much of this time had emphasized President Trump’s focus on international travel restrictions and downplayed the dangers of COVID-19.4 Eighty-one percent of those who never watch Fox News reported major behavioral changes, compared with just 57 percent of those who watch Fox News every day. 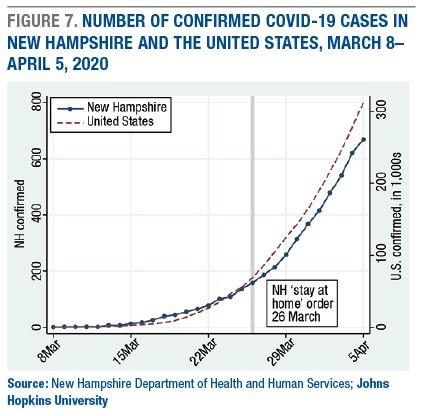 It is important to note that the survey was started at a point in time when New Hampshire had only 17 confirmed COVID-19 cases and the U.S. total was around 22,000 (Figure 7). It was only on the final day of the survey period that Governor Sununu deemed the situation serious enough to issue a stay-at-home order. It will be of interest to see how responses to later surveys differ as the number of New Hampshire cases grows into the thousands and the nationwide number likely into the millions.

Creating Consensus for a Science-Based Approach to Combating COVID-19

The COVID-19 pandemic presents a threat, unprecedented in recent history, to the health of U.S. and global populations. Defeating the virus and ensuring that other pandemics do not emerge in the future depends on the collective efforts of the scientific community, public officials, and society as whole. Most New Hampshire survey respondents said they were voluntarily heeding recommendations to change their daily routines. Although staying home is difficult and disruptive, it is essential to slow the spread of disease and save lives. Mostly positive views regarding Governor Sununu’s handling of the crisis, surveyed before his stay-at-home order, might help to give this order weight and improve public compliance. At the same time, many people had expressed no opinion or just mild “leaning toward” opinions, suggesting that his actions before giving the order—but while contagion was rapidly spreading—had not made strong impressions.

The coronavirus pandemic has emerged at a time of political accusations about “fake news” and frequent efforts to erode trust in science that conflicts with political agendas. Previous research shows the impact of such efforts among subgroups of Americans who are increasingly skeptical about science. Beliefs about scientists’ integrity can influence acceptance of science-based advice during health crises, as evidenced in research on the Zika virus outbreak in 2016—where those questioning scientists’ integrity were less likely to support policy interventions to combat the pandemic.5 Confidence in science and scientists is imperative, however, for enacting the difficult preventative measures needed to ensure public safety during the COVID-19 pandemic.

Results from the Granite State Panel show that regular viewers of Fox News have been significantly less likely to follow the scientific recommendation to change their daily routine to stem the spread of the coronavirus. It would be valuable if all news outlets, irrespective of their ideological emphasis, helped to convey realistic information on the urgency of the problem and the need for behavioral as well as policy changes to slow the spread and deal with the consequences of COVID-19. Some Granite Staters strongly support President Trump and have confidence in the federal government’s response to the coronavirus. The president’s messages about the virus, however, have markedly diverged from those from the scientific community. Just as clear and consistent support for science-based recommendations is needed from all media sources, so too should political leaders do their part to help communicate and implement science-based recommendations for coping with this global health crisis. As Dr. Tedros Adhanom Ghebreyesus, director general of the World Health Organization, stated, “We are all in this together, and we can only stop it together. This is the time for facts, not fear. This is the time for science, not rumors. This is the time for solidarity, not stigma.”6

Thomas G. Safford is associate professor of sociology and faculty fellow at the Carsey School of Public Policy at the University of New Hampshire.

Support for coronavirus questions on this Granite State Panel survey was provided by the College of Liberal Arts at the University of New Hampshire.