What is New Hampshire?

What is New Hampshire?

What is New Hampshire: Demography

A place’s demographics are the characteristics of its population, including its size, age structure, racial-ethnic makeup, and migration patterns. For New Hampshire to thrive policymakers, businesses, and nonprofits must be aware of the state’s demography and demographic trends as they consider the needs of its people, institutions, and organizations. Demography may not be destiny, but there is peril in ignoring it.

This section of What is New Hampshire?, which is substantially based on an upcoming Carsey research brief by Ken Johnson of the Carsey School of Public Policy, describes the major characteristics of the state’s demographic makeup, looks at recent trends, and highlights some challenges we may face moving ahead. As with all parts of What is New Hampshire?, we welcome feedback on how this section may be improved. Are there areas of demographics that you’d like us to cover in more detail or other challenges that we should highlight? Please let us know by emailing Carsey.WINH@unh.edu.

New Hampshire was home to 1.36 million residents in 2018, making it the 41st most populous state, slightly behind Hawaii and slightly ahead of Maine. Granite Staters are clustered in the southern counties, with 53 percent of the population residing in Hillsborough and Rockingham Counties alone. 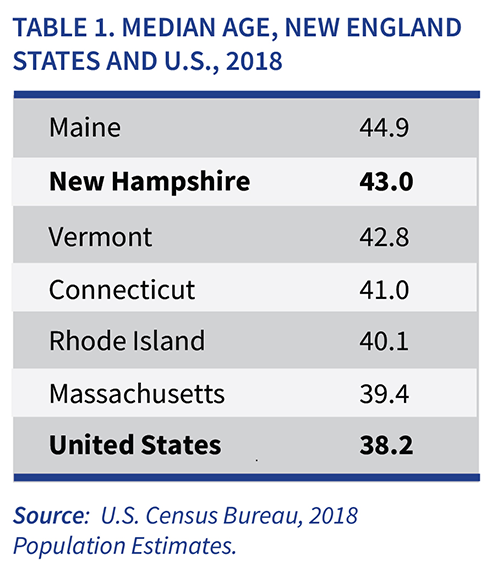 New Hampshire is the second-oldest state in the nation, with a median age of 43 (Table 1), and 18 percent of residents are over age 65, compared with 16 percent nationwide. However, as shown in Figure 1, the state’s age distribution is skewed not only by a high share of elderly but also by a relative absence of younger adults, especially those age 25-40. This distribution compares with the distinctly more bell-shaped population distribution for the United States as a whole (Figure 1), where a wider population base of young people results in a less top-heavy distribution. ADA Table

New Hampshire is 90 percent non-Hispanic white, ranking 4th in the nation in that measure (Figure 2 and Table 2). ADA Table 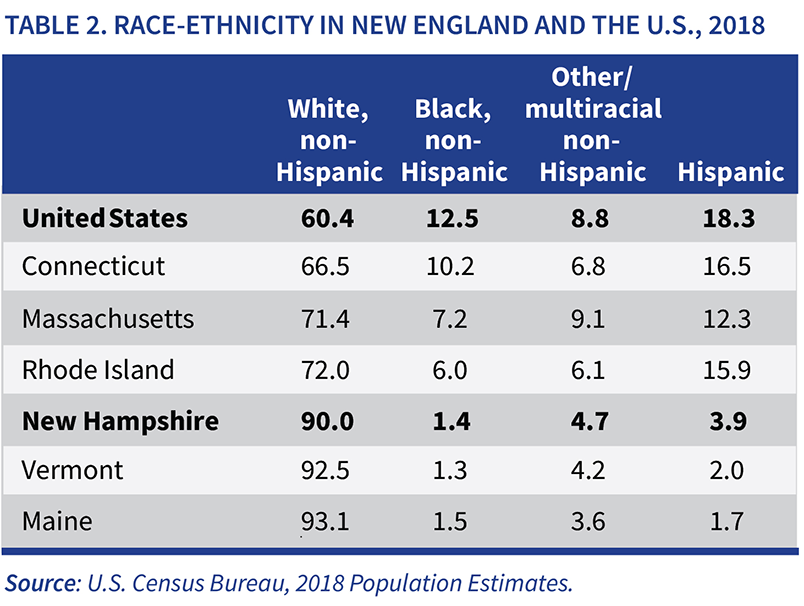 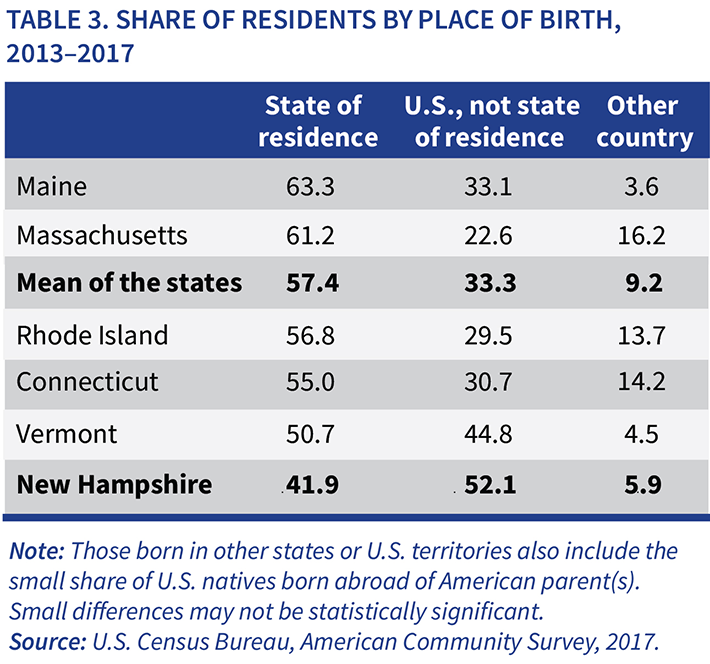 Though New Hampshire is often characterized as a place where residents’ lineage goes back generations, in reality the state has one of the most mobile populations in the country. Only 42 percent of the state’s residents were born in New Hampshire, far less than the average across New England states (54 percent) or the average for all states (57 percent) (Table 3). Among those over the age of 25, only one-third were born in the state. ADA Table

Granite Staters are relatively well educated, with more than one-third having at least a bachelor’s degree (Table 4), a share placing it in the top 12 states. Although high by national standards, this share of college-educated adults is more average for New England and lags substantially behind Massachusetts. ADA Table 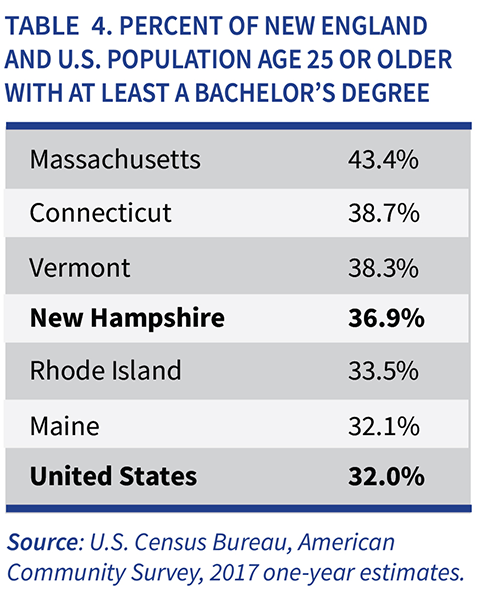 The Pace of Demographic Change in New Hampshire

New Hampshire gained 40,000 residents (a 3 percent increase) between 2000 and 2018, and the population hit 1,356,458 by July 1, 2018, according to the Census Bureau. This recent population gain, modest compared to the annualized gains in each of the previous four decades (Figure 3), is the result of two related but distinctly different demographic processes. The first is natural increase, which is the excess of births over deaths. Natural increase has contributed to overall population growth in New Hampshire throughout the state’s history, but it has diminished over the past several decades. With less natural increase, the state now depends increasingly on the second demographic component of change, net migration, which is the difference between the number of people moving into New Hampshire and the number leaving. Migration has long been important to New Hampshire, but it is far more volatile than natural increase and can change abruptly in response to shifts in the economy.

Migration includes both domestic migration— the movement of people between locations in the United States—and immigration from abroad. Net immigration is the difference between the number of people coming into an area from outside the country and the number of people leaving the country from that area. Each of these components contributes to the overall migration gain or loss for the state. Immigration was important to New Hampshire early in its history and again at the turn of the 20th century, but it has played a very minor role in overall migration gains during the last half-century. Today, only 6 percent of New Hampshire’s residents are foreign born, compared to 13 percent of the U.S. population. Immigration played a more prominent role during the Great Recession and its aftermath not because it surged but because domestic migration diminished substantially. In recent years, domestic migration has rebounded, though not to the levels of earlier decades.

The Impact of the Recession on New Hampshire Demographic Trends

The long-term trends above show that both natural increase and migration have played important roles in the growth of New Hampshire’s population. However, recently population growth has been uneven. Between April 2000 and July 2003, the state gained an estimated 13,300 residents annually. But in 2007-2010, years roughly coinciding with the Great Recession, the annual population gain diminished to just 1,400, though it has recovered recently (Figure 4).

The Great Recession had a profound impact on the state’s demographic trends. In New Hampshire, as elsewhere in the United States, falling fertility rates during the downturn resulted in less natural increase—a fact reflected in the diminishing annual rates of natural increase in Figure 4. Recent research suggests that the fertility reductions that began during the recession are continuing. In contrast to this steady decline in natural increase, net migration was volatile during the recessionary and post-recessionary period. From 2000 to 2003, the net migration gain was 8,600, but by 2007-2010 the state had a net migration loss of more than 2,100 migrants annually. This migration reversal occurred because during the Great Recession job losses, diminished retirement accounts, and a severe slump in housing prices made it difficult for people to move. As a result, states such as New Hampshire that have long enjoyed a net influx of migrants saw the inflow of new residents dwindle. As the Great Recession’s impact on New Hampshire began to wane, migration revived and population gains increased. By 2014-2018 the annual net migration gain was nearly as great as between 2000 and 2003. However, natural increase was minimal, so the population gain was considerably smaller than it had been just before the recession.

Recent Census Bureau estimates illustrate how much New Hampshire’s demographic trends have changed in the last few years. The state’s population grew by more than 7,000 annually between July 2016 and July 2018 (Figure 5), an increase 50 percent greater than between 2014 and 2016. Migration accounted for nearly all the gain: the state had a net domestic migration gain of 4,300 annually between 2016 and 2018 compared to just 300 between 2014 and 2016 (there was a net domestic migration loss earlier in the decade). New Hampshire also received 2,600 immigrants from other nations between 2016 and 2018, somewhat fewer than in the past. In contrast, births in New Hampshire now only minimally exceed deaths. Thus, natural increase has contributed little to recent population gains.

The diminishing contribution of natural increase to New Hampshire’s population growth is illustrated in Figure 6. In the 1970s, the 1980s, and particularly the 1990s, there were many more births than deaths in the state. In 1990, for example, 17,800 births and just 8,400 deaths produced a natural gain of 9,400. Births diminished over the rest of the decade before stabilizing at between 14,000 and 15,000 through 2008. Following the onset of the Great Recession, births diminished sharply in New Hampshire because fertility rates were low and the child-bearing-age population did not grow. Between 2011 and 2018, New Hampshire averaged just 12,200 births a year while deaths, which had slowly increased from 1980 to 2008, turned sharply upward in 2009 because of population aging and rising drug-related mortality. The recent decline in births coupled with the uptick in deaths resulted in natural increase contributing just 200 additional people annually between 2016 and 2018.

The pace of population change in New Hampshire is geographically uneven. Many fast-growing areas are concentrated in the southern and central parts of the state (Map 1), while slower growth or population loss characterize the northern part of the state and the area along the Connecticut River. Population gains in New Hampshire are stimulated by two factors. The first is the peripheral sprawl of the Boston metropolitan area: population growth rates are high in a broad band around the outer edge of the Boston metropolitan area, including much of southeastern New Hampshire. The second is the attraction of recreational areas in central New Hampshire. The selective de-concentration of population in the state is consistent with national trends, which show high growth in lower-population-density recreational areas and along the urban edge coupled with population stagnation or loss in remote lower-population-density areas that depend on extractive industries such as forest products, farming, and mining. The data also show that though population growth diminished across the state between 2010 and 2018 compared to 2000 to 2010, the patterns of population redistribution are consistent. Areas with population growth between 2000 and 2010 were more likely to be growing after 2010, but population gains were smaller. In contrast, areas that lost population or grew slowly between 2000 and 2010 were more likely to lose population, or gain less, in the later period.

Population changes occurring in three New Hampshire counties further demonstrate how spatially uneven demographic change has been (Figure 7). Carroll County, an amenity-rich area easily accessible from large urban centers in southern New England, grew substantially over each of the last several decades because of its appeal to amenity migrants. Growth slowed considerably between 2010 and 2018, but Carroll still showed a modest population gain during the period. The entire gain was fueled by net migration, which offset the excess of deaths over births.

In northernmost Coös County, wood and paper products were long the mainstays of the local economy, with large mills employing generations of residents who processed the timber of the vast northern forests. Today, the mills are largely gone, and the county lost population between 2010 and 2018, primarily because deaths exceeded births but also because there was a net outflow of migrants. Yet Coös County is also situated in a scenic region with ski areas and grand old resorts that have welcomed generations of vacationers and now amenity migrants. There are efforts underway to facilitate more regional cooperation to attract new business and migrants to these areas, and so their demographic future remains in flux.

Hillsborough County, with 415,247 residents in 2018, is the most populous in the state. It includes the state’s two largest cities—Manchester and Nashua—as well as a substantial suburban population, and over the past several decades the proximity of both cities to Boston has contributed to their growth. Between 2010 and 2018, Hillsborough County grew modestly because there were more births than deaths in the county and a modest net migration gain.